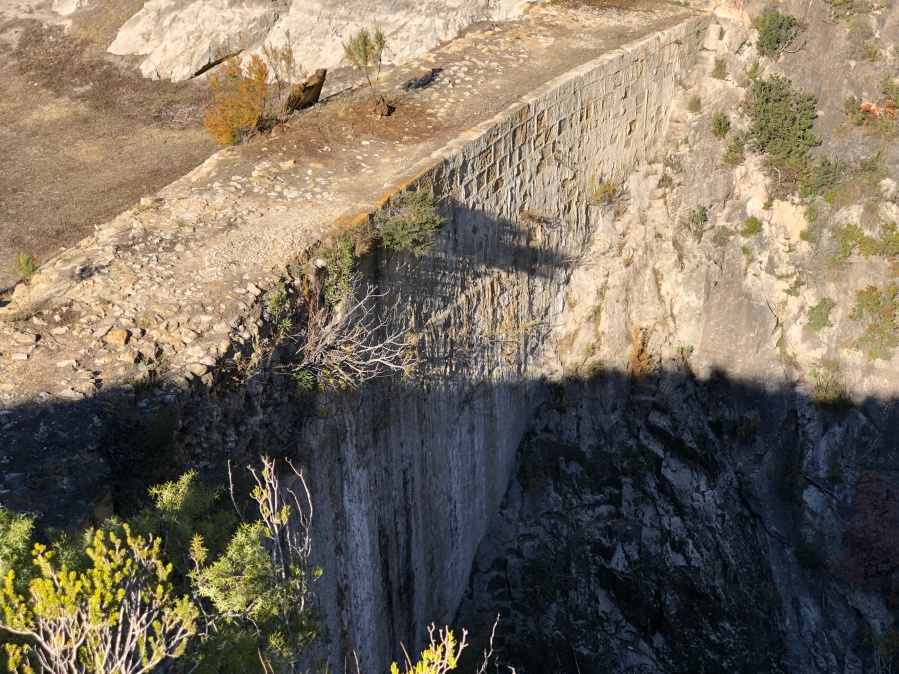 Duration – about an hour there and back from parking your car, including time for admiring the views. Easy, flat walking, some shade. Directions and a map at the end of this post.

It doesn’t rain often here on the Costa Blanca. But when it does, it’s usually a real downpour. It rarely lasts for long though. So for centuries, the key thing has been to capture some of that precious rainfall before it runs off into the rivers and the sea, and use it for growing crops.

Which means dams. Villajoyosa has its own, relatively modern concrete dam, a few kilometres out of town near Orxeta. But there’s also a much older dam, built more than 300 years ago, further up in the mountains near the village of Relleu.

And it’s a great little walk with a dramatic gorge at the end of it. And even better, there’s a walkway being built in the gorge itself (due to open in February 2022) so you should get even more spectacular views.

El Pantano (el Pantà in Valenciano) de Relleu was an engineering marvel when it was built. And it was officially a miracle! I mean a proper miracle!

Rewind to the 17th century and the area around Villajoyosa was suffering from serious drought. So much so that the area was becoming depopulated, because crops were failing through lack of water for irrigation and there wasn’t enough food to support the population. So, the townsfolk petitioned the king to allow the construction of a dam at Relleu, to solve the water shortage.

One day (8 May, 1653 to be precise), the image of the Virgen de Santa Marta in Villajoyosa church was seen to shed tears. Only a few days later did people realise that this was the precise date that King Felipe IV signed the order to construct the dam – so Santa Marta was crying tears of happiness. There’s a Fiesta de las Lagrimas (tears) de Santa Marta every May to celebrate.

The locals around Relleu weren’t quite so happy – they didn’t appreciate their land being flooded to suit folk down on the coast. But construction went ahead anyway. No-one’s quite sure when it opened, but it was certainly doing its job by the early 1700s.

Enough history – back to the walk. There are two ways to do this: first, quick and flat, which takes about 10-15 minutes. You’re essentially walking along the dried-up lake bed behind the dam, which is great when there is no water there (most of the time, to be fair!) Or there’s a higher level path which avoids getting your feet wet when the lake has filled up – full directions, plus map, at the end of this post.

The dam wall itself is only 2-3 metres high, because over three centuries, the lake continually silted up because of all the debris washed down from the surrounding land. As the lake bed got ever higher, so the engineers kept raising the level of the dam wall to compensate, so it’s now 44 metres (145 ft) above the gorge below.

It’s easy to scramble up on to the top of the dam for vertigo-inducing views into the valley. But beware, there’s no safety barrier, and it’s a very long way down on the other side!

It’s easy to forget that this must have been a pretty amazing engineering achievement back in the 18th century. Yes, plenty of dams had been built before, but not in such a difficult location and with such basic construction techniques; the Relleu dam was one of the first modern dams in Spain.

It’s also a cool spot for barranquismo – canyoning in English – which means donning a wetsuit and crash hat, abseiling into the gorge and finding your way out. Video here.

Off to your right, there’s a viewpoint (mirador) overlooking the gorge – and something new for 2022, a walkway which takes you about 200 metres into the gorge itself, ending in a transparent platform. It’s a bit like a pint-sized version of the Caminito del Rey near Malaga in southern Spain. Construction work at Relleu was still under way when I was there in December 2021, but the walkway should be open by this February. A really cool idea!

The silting up of the lake meant the dam went out of use in the last century, when the big concrete Amadorio pantano was built downstream in 1957, much closer to Villajoyosa. Since then, the Relleu dam has been slowly decaying – but hopefully, the walkway should give it a new lease of life. For a birds eye view into the gorge from the top of the dam, check out my video here.

How to get there

Drive up to Relleu from La Vila Joiosa on the CV-770 and then CV-775. As you reach the village, don’t go through the centre, but follow the ‘circumval.lació’ sign, and then turn left where you see the sign ‘pantá de L’Amadori S.XVIII’. Follow the road (Cam Amadorio) downhill for a couple of kilometres and you’ll see a sign to the dam with a tourist information board just beyond it.

Park up and start walking from the info board – after a couple of hundred metres, the path divides. Head straight on down the stony footpath which opens up into the dried-up lakebed, which in turn leads you to the dam. Or take the right hand fork for the longer route which keeps your feet dry when the lake is full.

Try these other great walks around Villajoyosa:

5 thoughts on “Top walks around Villajoyosa – the miraculous Relleu Dam”