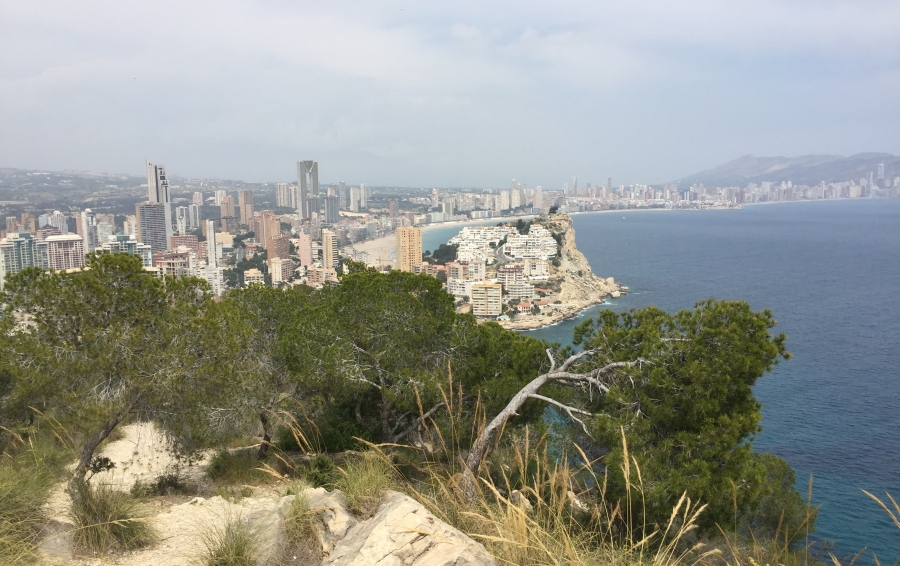 Duration: 1 hour. Easy. Steep steps at start, stone tracks, long flight of steps at end. Very little shade, but occasional concrete benches to rest on. Map at the end of this post.

This walk takes you from the pleasant shingle beach of Torres along the rugged coastline to the 16th century watchtower of Torre d’Aguiló and spectacular views of the skyscrapers of Benidorm. There’s a quick 15 minute version here that just takes you up to Torre de’Aguiló itself – but you will miss out on some great sea views.

So let’s stick to the longer version! As you arrive at Playa de Torres from the main N-332 Villajoyosa to Benidorm road, you’ll notice a ghost town grid of empty streets and pavements; another casualty of the property crash that hit the Spanish economy like an express train in the crisis of 2008. Only now is the promised development taking shape.

Start the walk at the opposite end of the beach from the campsite, following a path and rough steps up to the headland. From there, simply follow the track along the cliffs towards Benidorm.

It’s well marked, with signs saying “Colada de la Costa” and stone “Via Pecuaria” markers at regular intervals. Vias Pecuarias were drovers’ roads used by shepherds who brought their flocks down from the mountains in winter.

The path winds in and out, following the contours of the coves and cliffs; all you’ll see are rugged sea views, pretty little flowers among the rocks in springtime,  plus the occasional mountain biker (it’s a popular route) and walkers like yourselves.

About half way through, you’ll notice the tiny cove of Raco de Conil down below, a nudist beach served by a narrow tarmac road that comes over the hill from the main N-332. It’s a long way down from our path though, so you have to ask yourself; how badly do I want to go skinny dipping?

But there is a plus point; there’s a cool clifftop route (arrowed below) that takes you from sea level at Raco de Conil all the way to Torre d’Aguiló. It’s a lot more work, but the views are great!

We’re staying on the higher level path, so just continue onwards towards the Torre d’Aguiló, which you can see poking up over the top of the hill ahead.

Walk past a wire fence and as you near the tower, there’s plenty of shade among the pine trees and the odd picnic table to rest at. Then the final lap is a flight of steps that leads up to the tower itself.

It was built in the 1500s as part of a 60-strong chain of forts to protect the Valencian coastline from North African pirates, who were then a real menace.  These Barbary corsairs kidnapped local people and sold them in the slave markets of Algiers, or ransomed their captives; they terrorised coastal communities all over the Mediterranean and regularly raided as far as the south coast of England.

The tower would have been manned by soldiers whose job was to spot incoming ships and give warning by lighting a signal fire on the platform at the top and blowing a conch shell horn.

They also had to check all the coves along the coast every day at dawn and signal the ‘all clear’ by raising a pole with palm branches on it. The signal would have been picked up and passed on by the next tower in the chain – to the north, Torre de Les Caletes, just the other side of Benidorm, and to the south, the now-demolished castle at Villajoyosa.

Torre d’Aguiló has been restored, and there is a modern metal staircase that takes you into the tower itself, but it’s sadly not open to the public.

Out in the bay you’ll see the Islote (little island) de Benidorm; it’s uninhabited and a nature reserve, but for €15 you can catch a boat across from Benidorm.

Immediately below you lies the pretty beach of La Cala de Finestrat. Pretty, that is, if you’re looking out to sea. If you look inland, the bay is completely overwhelmed by high rise tourist blocks, the biggest of which is not much more than a concrete skeleton.

And the next bay along is the tourist mecca of Benidorm. Until the 1950s it was just a fishing village; now it has the greatest number of high-rise buildings per capita in the world (says Wikipedia). Compared to the tranquility of the walk along the cliffs, it’s like gazing down at a different planet.

Shortcut to the top!

I promised a shortcut to the tower, for folk who want to cut out the coastal walk from Torres and just climb up to Torre de L’Aguiló itself. Park up on Carrer Tramuntana in Cala de Finestrat where you see the pink Torre signpost. A good gravel path takes you the 15-20 minute walk from there right to the tower itself.

If you’re still feeling energetic, cross the Cala Finestrat beach and climb up to Tossal de la Cala on the opposite side of the bay. The headland was a strongpoint in Roman times, and was settled by ancient Iberian people long before that.

You get an even more spectacular vista of the Benidorm skyline and the huge Playa de Poniente beach from up here. You can’t miss the giant M-shaped Intempo building which dominates the bay – see the pic above. It’s the tallest residential tower in Spain and yet another casualty of the Spanish property crash. Mired in financial scandal, the building was still empty the last time I looked, even though it was completed in 2014.

Cala Finestrat has its very own eyesore that’s been empty for even longer. Work stopped on the Atrium Beach Hotel, a huge concrete pile that dominates the little bay, back in 2003 following the deaths of two workers. There was also a little matter of a number of extra floors being built without permission on top of the hotel, a common scam on the Costa Blanca before ‘la crisis‘, as the Spanish still call the 2008 crash.

If you don’t fancy tackling the return leg on foot, you can get a bus back to Villajoyosa from Carrer Xaloc in Cala Finestrat. Bus info here.

Or if you’re feeling peckish, stop off for a good lunch at Restaurante Casa Modesto right on the beach at Cala Finestrat. The rice dishes are well worth a try.