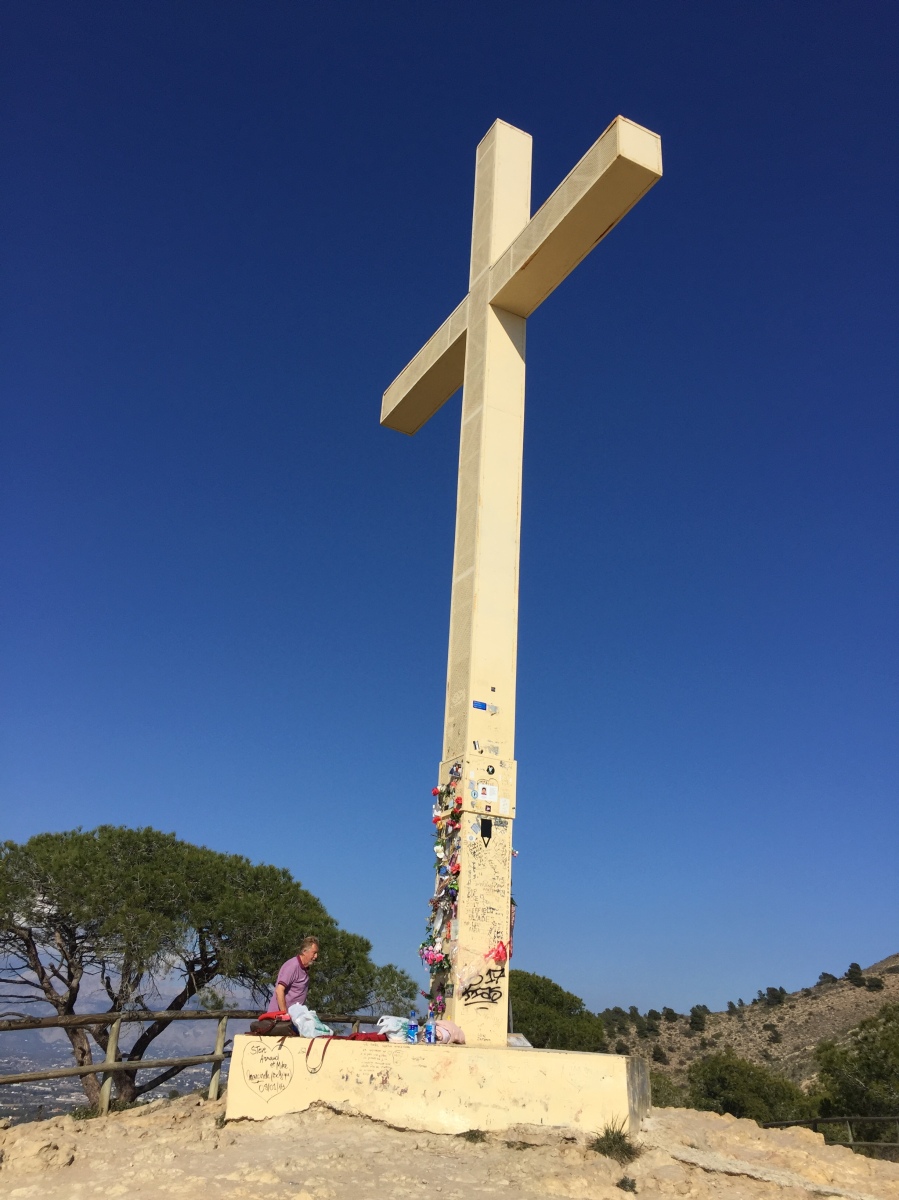 Benidorm is a phenomenon. It boasts more high rise buildings per person than anywhere else on the planet.

And the best place to see all this is from the Benidorm Cross, up on the Serra Gelada overlooking the Playa Levante. The view from up here is simply astonishing.

But the cross itself began life as a protest. Against bikinis, of all things. 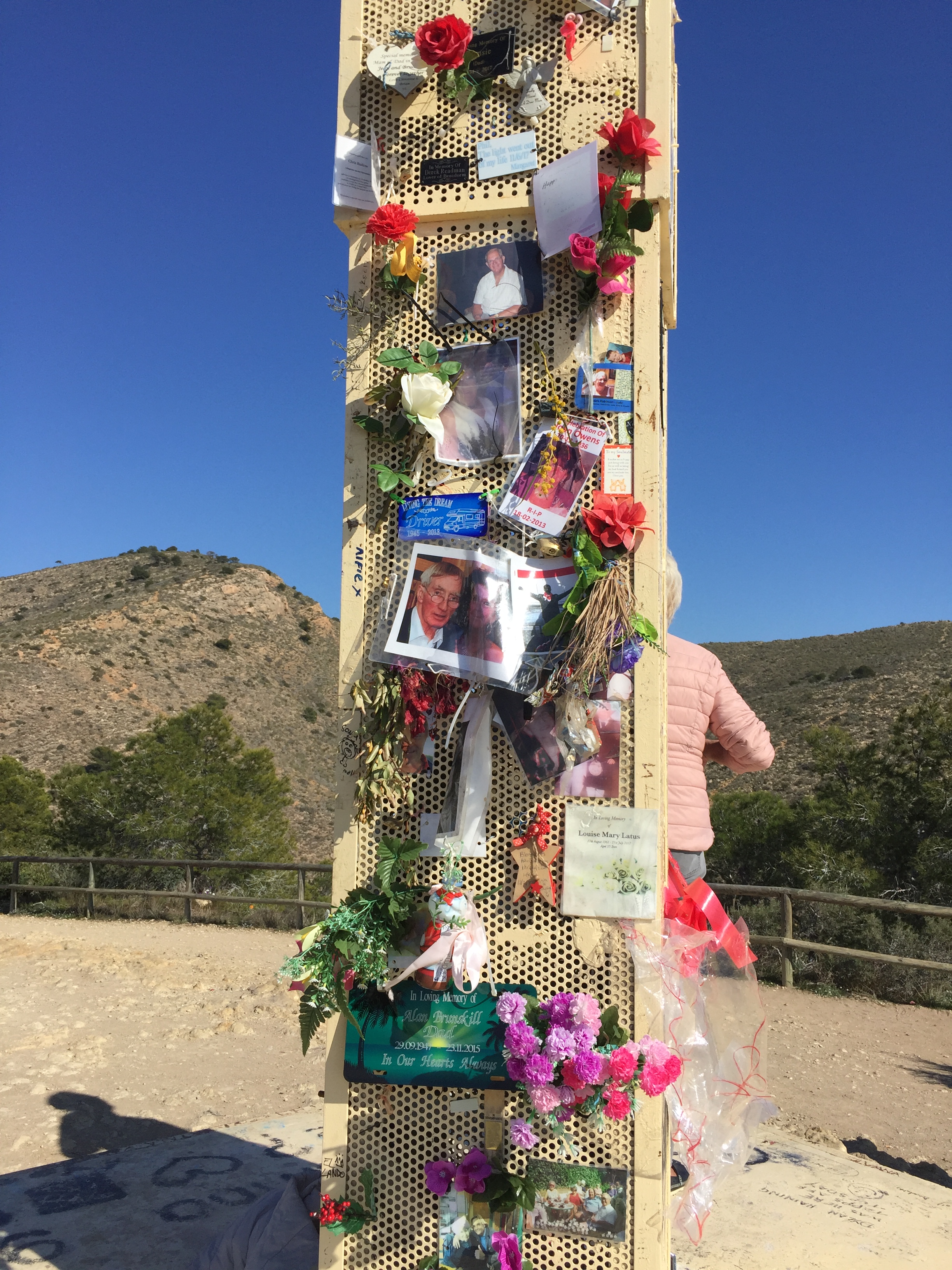 The cross has become an impromptu shrine for loved ones, mostly Brits

In the late fifties and early sixties, wearing a bikini was considered shocking, especially in General Franco’s Spain.

Back then, Benidorm was just beginning to transform itself from an obscure little seaside town into the tourist megalopolis that it is today. Women, mostly shameless foreigners, had taken to wearing those sinful bikinis on the beach. Cue outrage from the Catholic Church.

The Bishop of Orihuela was not happy. He threatened to put signs up outside the town proclaiming “El Infierno” (Hell!). And as part of a “Day of Forgiveness”, the faithful carried a huge wooden cross from the church of San Jaime up to a high point overlooking this sinful town.

The bishop threatened go even further and excommunicate Benidorm’s mayor (alcalde), Pedro Zaragoza Orts. He was the man who had taken the fateful decision to permit bikinis, because he knew it was good for tourism.

But alcalde Zaragoza decided to defy the wrath of the church  – and took his case to right to the top. According to Giles Tremlett in his great book ‘Ghosts of Spain‘, Zaragoza stuffed some newspaper down his shirt to keep out the cold, jumped on his Vespa scooter and rode all the way to Madrid to see General Franco himself.

Quite how he managed to talk his way into seeing the Generalísimo isn’t known, but it did the trick. According to Economist magazine, the old dictator took a liking to this moustachioed mayor with oil on his trousers. Eight days later, Franco’s wife Carmen came to Benidorm and apparently visited regularly for years afterwards. With that seal of approval, alcalde Zaragoza heard no more about excommunication.

His marathon Vespa ride to see Franco even featured in a short film – called ‘Bikini’ appropriately enough – made for cable network HBO Latino in 2014.

The wooden cross that the faithful carried all the way up the hill that day was toppled in a storm in 1975. Perhaps a sign that the Almighty wasn’t really that bothered about bikinis? 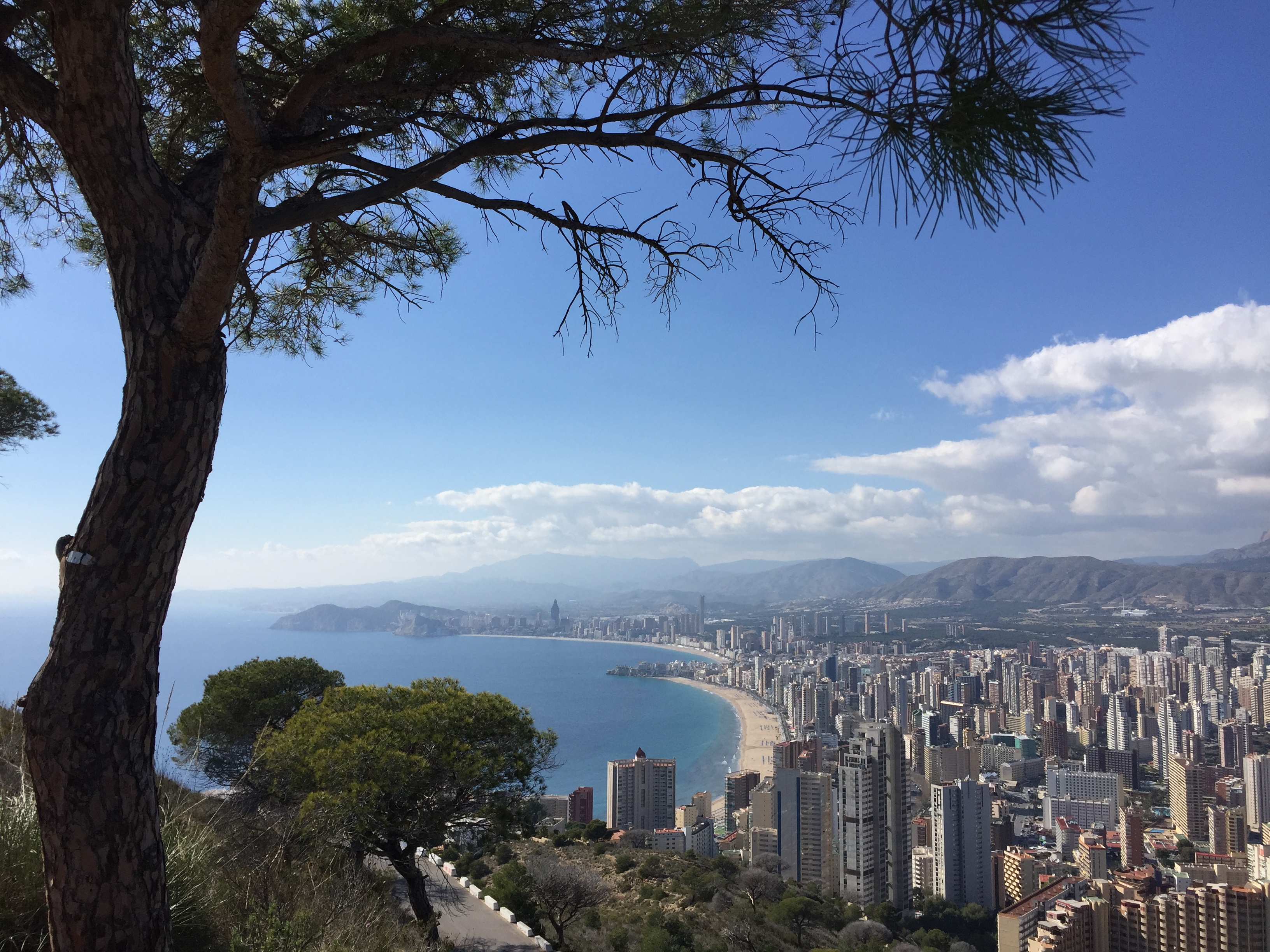 More high rise buildings per person than anywhere else on the planet…or so says Wikipedia!

The amazing panorama from the foot of the Benidorm Cross

God-fearing folk clearly weren’t taking any chances though. So another cross, this time made of metal, was put in its place…and that’s the one we see today. It’s since become a kind of unofficial shrine where people, mostly Brits, leave photos, flowers and tributes to dead friends and family. The scrawled graffiti on the cross and its base is definitely on the tacky side though.

It’s a bit of a climb from the end of the Playa del Levante up to the cross, especially on a hot day (see the map below). Beware: there’s no bar at the top – unusual in Spain – so take water. Allow about 45-50 minutes, but the views are worth it. Or take the lazy way up by driving – it’s on Calle Taywan on satnav or Google Maps – park just below the summit and walk the rest of the way. Or hire an electric bike and cycle up!

For serious hikers, this is also the start of a proper walk across the Serra Gelada nature reserve to the little town of Albir on the other side. Full disclosure: we haven’t done this one yet!

For more on the Serra Gelada, see my blog here on the Faro de L’Albir walk, on the other side of the peninsula. It’s one of my favourites.