Duration: 45 mins each way. Easy walking on paved road, gentle gradients. Suitable for children’s buggies/powered wheelchairs. Very little shade on second half of walk. Take water (or buy a bottle from a machine at the start of the walk). See map at the end of this post.

A wonderful walk along the slopes of the Serra Gelada nature reserve, with an amazing panorama across the bay to Altea and the towering Peñon de Ifach rock at Calpe. You finish at the clifftop lighthouse (faro) of Albir, with vertigo-inducing views down to the rocks three hundred feet below.

You can’t miss the Serra Gelada;  its massive bulk rears up where the high-rise towers of Benidorm finish. The starting point for our walk – the little seaside town of Albir – is a few kilometres up the coast from Benidorm, tucked under the northern flank of the Serra Gelada peninsula.

Serra Gelada translates as Frozen Mountain, which might seem an odd kind of name for cliffs regularly baked by 30-40˚C temperatures. But it was christened by fishermen out at sea, who saw the peninsula bathed in moonlight and thought it looked rather like ice. Maybe after a nip or two of brandy…

Head for the car park in Albir on Cami Vell del Far; you’ll also find an information point there and toilets/water. 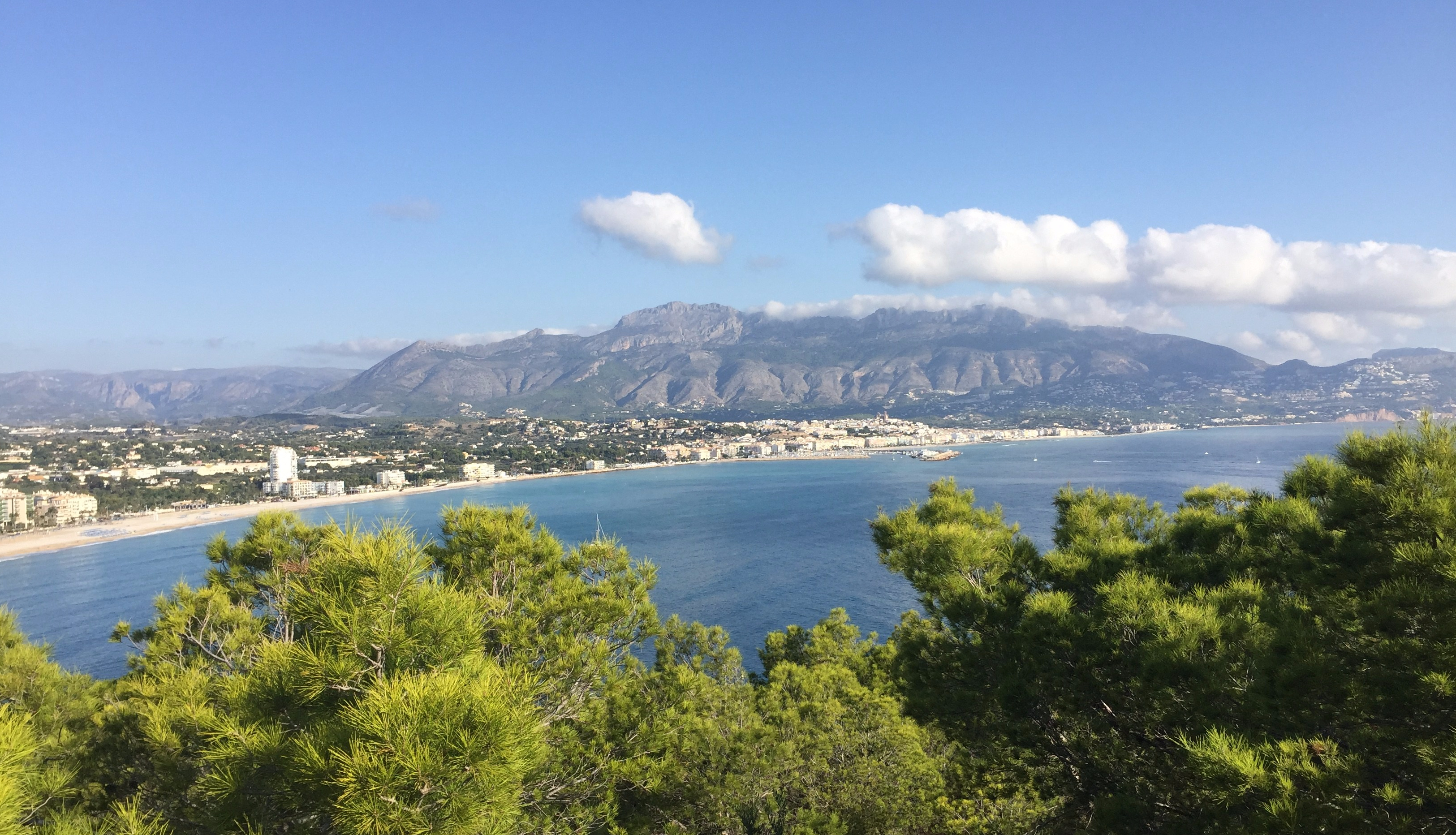 Stunning views to Altea. There are handily placed miradors (viewpoints) along the route, from where you get spectacular vistas across the bay

A nicely paved road now, but spare a thought for the lighthouse keepers back in the day. They had to struggle along a stony path back and forth from Albir. The road was only built when the lighthouse was automated in the 1960s

Happily, there’s a paved road all the way, built in the 1960s to serve the lighthouse, complete with a tunnel through a particularly obstructive bit of mountain. So this is a walk you can take at your own pace – some run it, some cycle it, others gently amble.

The first section takes you through fragrant pine woods which slope steeply down from the peaks above to the sea below. There are plenty of route markers and signs (in English as well as Spanish) telling you more about the flora, fauna and geology of the peninsula.

The more energetic walkers can branch off to the right early on, up the steep paths towards the 1,400ft peak of Alt del Governador and the Camí de la Cantera which takes you back across the Serra Gelada to Benidorm.

Magnificent pine woods; the first part of the walk is cool and fragrant with pine resin

But we’re doing the short and easy version to the lighthouse, so press on ahead to the tunnel, and as you emerge from the gloom, the terrain changes. Gone are the shady pine woods; instead there’s a harsher landscape, baked by the sun, with heather, thyme, rosemary, lavender and esparto grass hugging the rocks.

Esparto grass growing wild; back in the day, it was soaked in water at the nearby Amerador beach, dried and then used to make baskets.

You’ll see the lighthouse perched on its cliff in the distance, but the road is anything but a straight line, hugging the mountainside and winding in and out of the contours (see map at the end of this post).

On your left, you’ll come across the signpost “Cala de la Mina”. This path takes you down to the ochre mine, where they extracted a mixture of clay and iron oxide used for making paint. Remember red ochre in the paintbox you had as a kid? That was the stuff they dug out here.

The mine shut down in the early 20th century, but you can still see a line of stone columns running down the ravine; back in the day, this supported the wagon railway that took the ochre down to the shore and out to ships in the bay.

It’s a bit of a scramble down to the mine entrance and the little pebble beach at Cala de La Mina (Mine Cove), but it’s worth the effort. There are actually two tracks leading downhill from the main path (one marked Cala de La Mina and the other, a little further on, marked Mina de Ocre). They do link up, so you can go down one and then up the other. 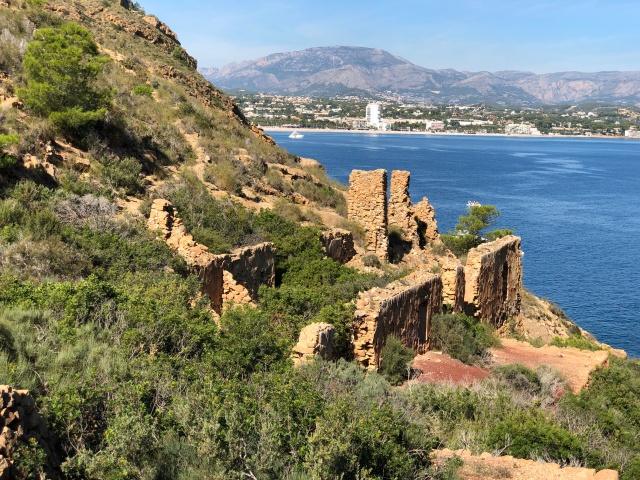 The ruins of the ochre mine buildings

The lighthouse itself is well worth the walk. Not just the views, which can hardly fail to be spectacular, but also the exhibition inside. Time your walk to coincide with the opening hours. They can be a little confusing, but these are the latest I have:

Most Spanish lighthouses don’t allow the public in at all, so this is a bit of a treat. And it’s free. 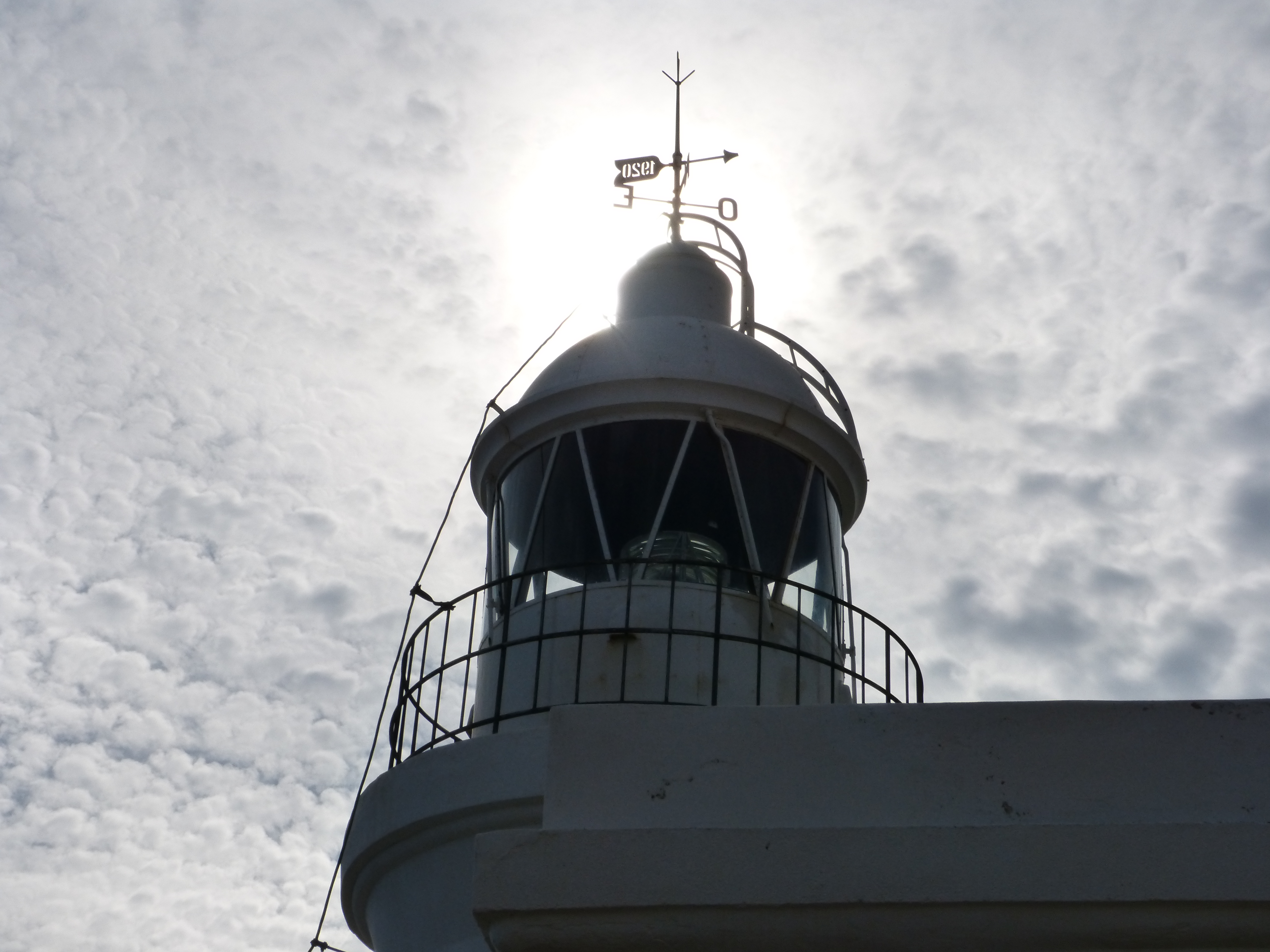 Outside on the lighthouse terrace

Not so long ago, the buildings where the keepers lived with their families were pretty much derelict; the lighthouse itself was the only thing that worked.

But now the rooms have been renovated and turned into galleries; grainy family snaps relate the strangely moving stories of the people who manned this lonely outpost until the light was automated in 1960. One tells how the lighthouse keepers even had to build their own bread oven, because before the road was constructed it was impossible to get to Albir and back every day to buy fresh bread.

The lighthouse keepers’ stories; a glimpse into the lives of the men who manned this lonely outpost and their families.

Use the free telescope on the terrace to spot bottlenose dolphins.

Outside on the terrace, gaze down 300 feet (90 metres) to the rocks below. If you’re lucky (we weren’t) you can see bottlenose dolphins in the sea; there’s a telescope on the terrace that’s free for visitors. Apparently the dolphins are partial to the pickings from the fish farm you’ll see out in the bay; rather like a year-round free lunch.

Next to the lighthouse, you’ll see the stump of La Torre Bombarda, the old 16th century watchtower built to warn coastal communities of Berber pirate attacks from North Africa. They were a serious menace back in the day; the tower is part of a chain that stretches southward to Villajoyosa and beyond.

Then head back the way you came to the car park and enjoy the same fantastic views, but this time in reverse order!