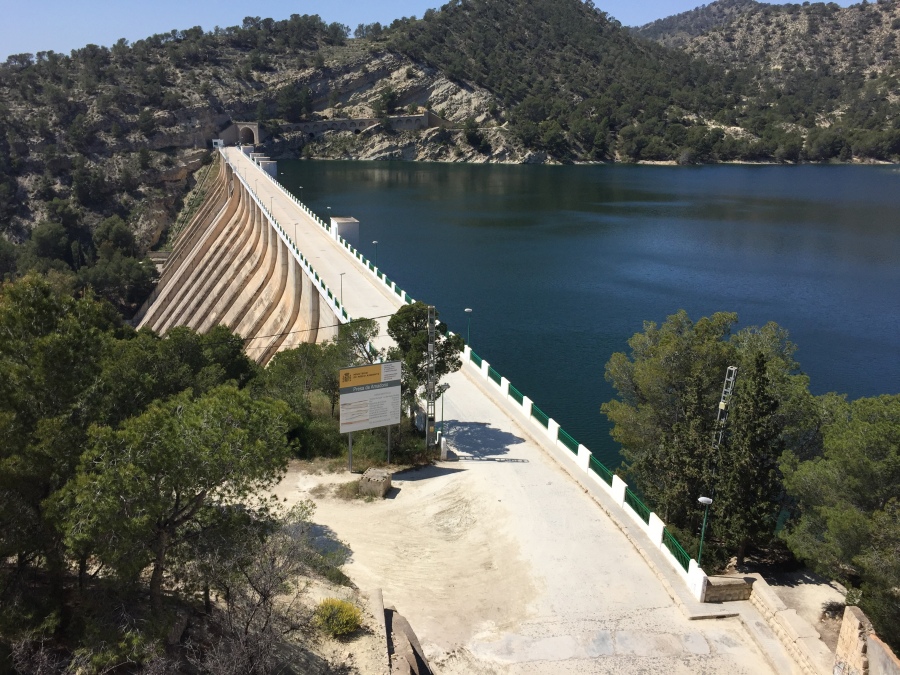 An easy walk inland from the little hamlet of La Ermita, up to the imposing dam on the Rio Amadorio, catching a few curiosities on the way. Uphill, but not steep. Beautiful mountain views from the dam. One hour each way. Map at the end of this post.

La Ermita is a tranquil little village clustered around the church of San Antonio Abad, a kilometre or two inland from the main town of Villajoyosa.

Fortify yourself with a drink or ice cream in the bar sandwiched between the church and the old school, and head off down Partida La Ermita to start the walk.

The main square with church of San Antonio Abad

Just before you hit the main road, you’ll see a stone cross, the Cruz de Piedra, originally Roman. It marked a crossroads on the Roman road heading from the coast up into the mountains. 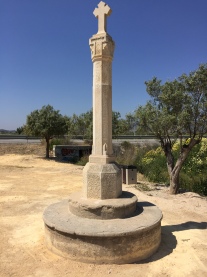 The Romans often placed shrines at crossroads as they believed that spirits would gather there.

This was the Camí del Peix (the Fish Road), so named because fish from the port of Villajoyosa were loaded onto mule trains for the steep 50 kilometre trek to Alcoy up in the mountains. Industrial goods came down in the opposite direction for export from La Vila to the rest of the world.

Pilgrims on one of the Caminos de Santiago would also have travelled this way; they landed at Villajoyosa and walked more than 1,000 km across Spain to the shrine of St James at Santiago de Compostela in Galicia. Some of the towns and villages along the Camí del Peix are now trying to revive it as a tourist route.

From the Cruz de Piedra, go straight across the main road and follow the narrow lane as it curves round to the right for a couple of hundred metres until you see a giant boulder jutting out into the road; the Roca Encantada (you guessed it; the Enchanted Rock). 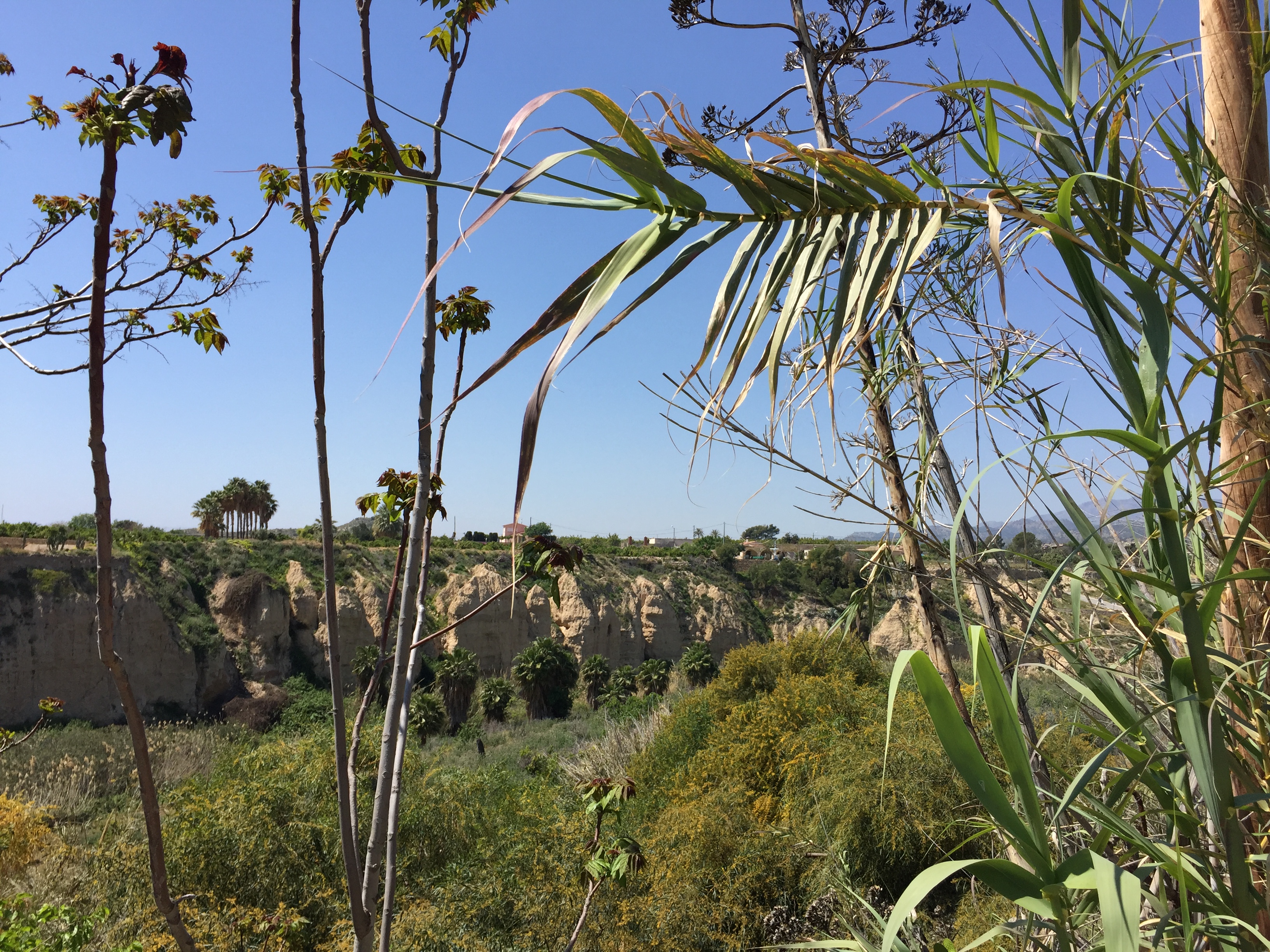 The valley of the Amadorio, La Vila’s river, from the Roca Encantada

According to local legend, on the eve of the Fiesta de San Juan, the rock opens up and an elderly woman dressed in white steps out. She’s wearing a hat with coloured ribbons. If you take one before she disappears back into the rock, true love will be yours. But if you choose the black ribbon…well, don’t make any long-term plans. You won’t be around long enough to enjoy them. The eve of San Juan is June 23 if you were thinking of trying your luck.

Reverse your steps and then almost as you hit the main road once again (check the map at the end of this post), turn sharp left and walk alongside the traffic for 200 metres or so. Then bear left up a single-track lane, past an olive grove, with the distinctive peak of the Puig Campana looming off to your right, until you reach the remarkable Olivera Grossa.

The tangled trunk bears witness to the immense age of the Olivera Grossa.

This is no ordinary olive tree; its trunk and branches are twisted with age and contorted into fantastic shapes. The Olivera Grossa has been around for an astonishing 1,400 years – nobody’s quite sure – and it’s still doing pretty well. Think about it; this tree was growing strongly BEFORE the Moors first arrived in Spain from North Africa in 711 AD.

Look over your shoulder to the left across the fields and you’ll see a tower with a roof on it. This is the Torre de Baix (the Low Tower), one of the watchtowers put up in the 16th century to warn against corsair attacks on the coast. If Villajoyosa was attacked, fires would be lit on the towers to warn the locals and summon defenders. The roof on top is a more modern construction.

Continue a hundred metres or so up the road and you’ll see another tower to your right, the Torre Dalt (the High Tower). Sadly, the tower and its neighbouring farmhouse are slowly crumbling away.

They found a Roman villa somewhere along this road, which leads to the hamlet of Xauxelles (the Valenciano name looks unpronounceable, but it’s slightly easier when written as Chauchelles in Spanish). The local priest, an amateur archaeologist, did some excavating back in the 1940s and found some remarkable stuff, which you can see in Villajoyosa museum or in the MARQ museum in Alicante (for more info, see my blog posts here and here).

A fragment of stucco from Villa de Xauxelles in the MARQ archaeology museum in Alicante.

It was probably the home of a very upmarket Roman citizen, possibly a senator with the imposing name of Lucio Lucrecio Servilio Galo Semproniano, and boasted lavishly decorated baths.

Archaeologists would dearly love to get back in for another good look at the site, but apparently it’s on private property, so that’s that….at least for now.

Our problem now is how to get across the Alicante-Valencia motorway, which blocks our path. The quickest way, if not the most scenic, is to follow the lane through Xauxelles until you hit the main Villajoyosa-Orxeta road. Turn left and cross the motorway bridge.

Then it’s eight minutes roadside walking (there’s a protected lane for pedestrians and cyclists on the right hand side) until you see the signs for Rugby La Vila and Embalse de Amadorio – the Amadorio reservoir – to your left.

A dead straight road takes you past Villajoyosa rugby stadium – yes, in this football-crazy country, they play rugby! La Vila actually has one of the best teams in Spain. Take in a match on a Sunday or have a look at my blog here.

Keep right ahead for 15 minutes or so and the dam comes into view. Branch left through a short tunnel (no cars, pedestrians only) and out onto the road that runs across the top of the dam. Views are great both ways; across the reservoir and up into the mountains beyond, or down to Villajoyosa and the sea (click through the slide show below)

The dam was built in 1957 to regulate the water supply on Villajoyosa’s river, the Amadorio. It’s around 200 feet high; easy to believe if you peer gingerly over the edge to the stream below.

Rainfall is pretty irregular here, so the water level in the lake varies wildly; in springtime 2017 it was almost full, but the year before, it was virtually bone dry. Then by January 2020, it was full once more, partly thanks to Storm Gloria. The dam even has its own website; you can check the water level and see for yourself how it goes up and down from year to year.

The road through the tunnel at the far end of the dam will take you around the lake towards the village of Orxeta. You can do a complete circuit, but we’ve not managed it yet!

So reverse your steps back across the dam, through the tunnel and turn to your left up the track to find the car park, with a picnic site and children’s playground among the pine trees. The two huge towers nearby are silos where they made the concrete that built the dam. 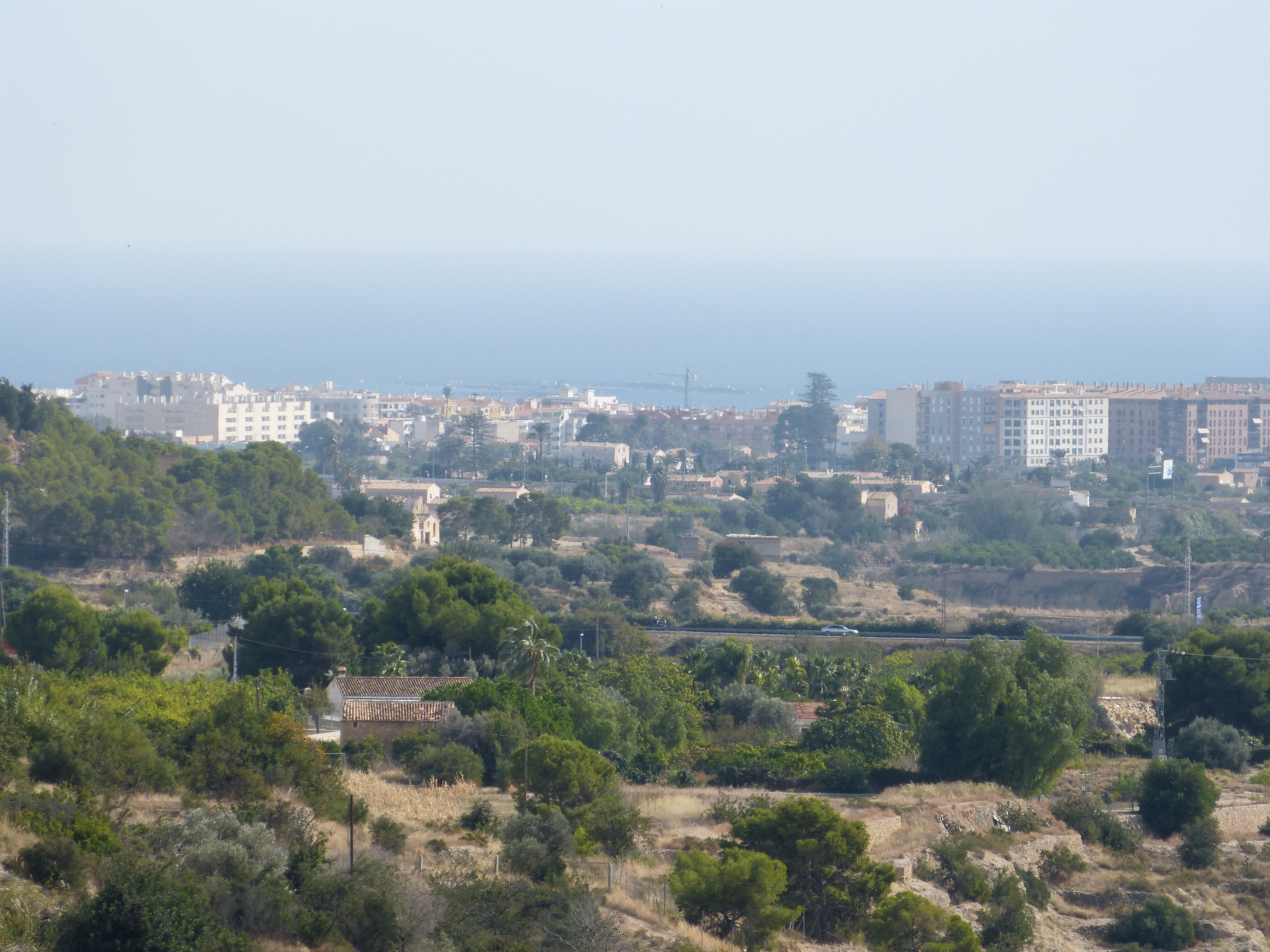 The view from the dam down to the coast at Villajoyosa

Looking up into the mountains from El Pantano de Amadorio

Looking across the reservoir inland to the mountains above Orxeta

There are some beautiful views across the reservoir from the car park, up into the Sierra Aitana mountains and across to the peak of Puig Campana on your right. On a clear day, you can just see the distant white globe of the military radar station commanding the ridge above Orxeta.

Head down the steps to the path that takes you for a gentle stroll along the lakeside. You can even go fishing!  I’m no fisherman, but according to this website, there are some sizeable carp in the lake.  You do need a permit, which you can buy in Orxeta. This website tells you where to get it, and has more information on the kind of fish you can catch.

Try some of these other walks around La Vila:

2 thoughts on “Top walks around Villajoyosa: La Ermita up to the Amadorio reservoir”