If you look up towards the mountains behind Villajoyosa on Spain’s Costa Blanca, one peak dominates the skyline; the one with the square gap in the summit, like a missing tooth. The Puig Campana. 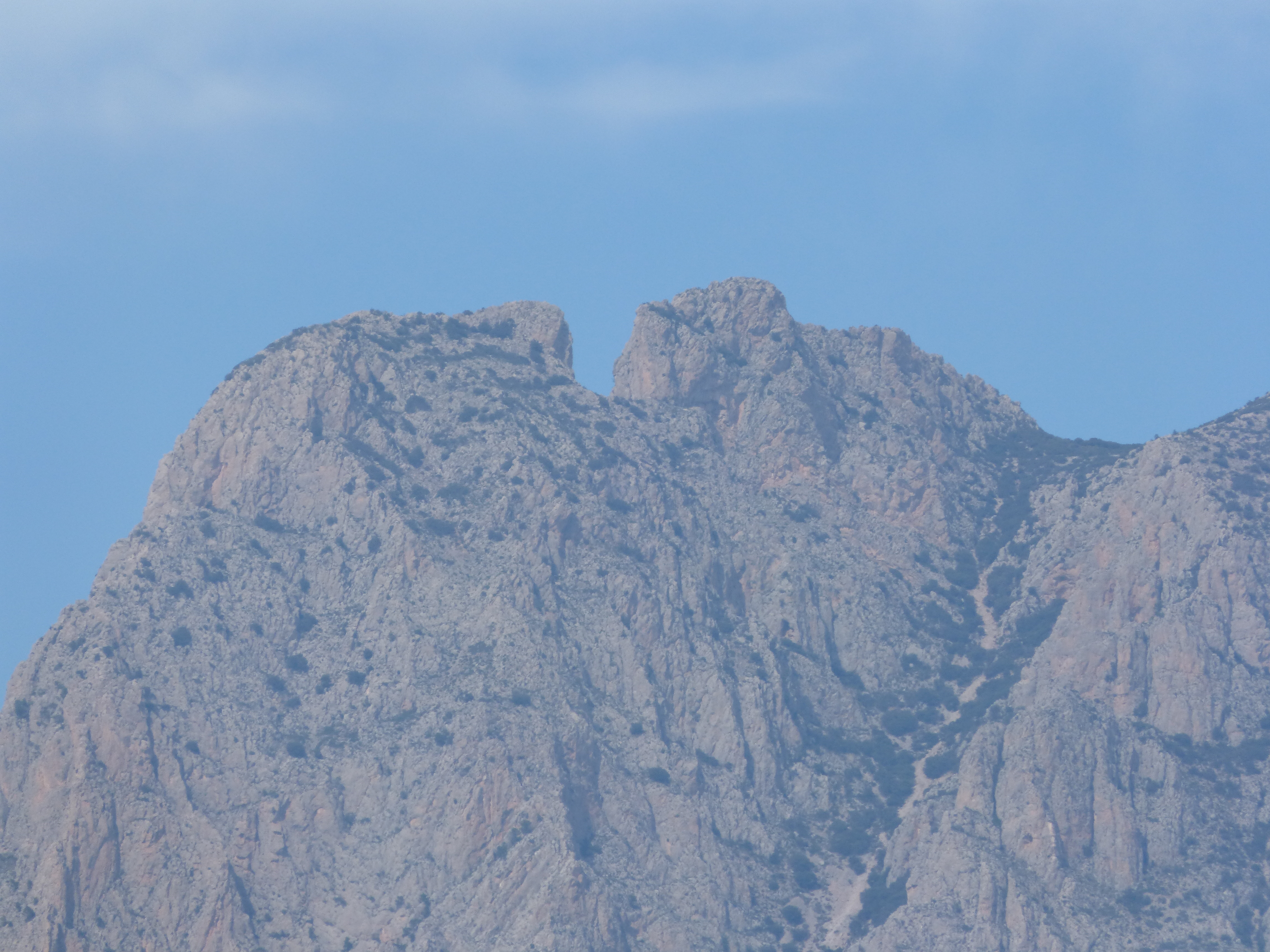 The distinctive cleft in the summit of Puig Campana

How that gap at the top came to be there is the stuff of legend (well, various legends actually).

One tells how Roldán (aka Roland) a warrior in the army of the Holy Roman Emperor Charlemagne, got into a fight on the summit with a Moorish chieftain.

Roldán was getting the better of the encounter, and with the Moor at his mercy, Roldán struck a hefty blow with his sword Durandarte. But his victim managed to dodge just in time, and the sword struck the rock with such force that the square gash we see today was slashed into the peak.

The rock cut from the mountain then rolled down into the sea, where it became the island of Benidorm (Islote de Benidorm) that you can see out in the bay. The gap left on the mountain became known as el Tajo de Roldán (Roldán’s cut), or El Portell (the gate).

A more romantic myth tells of a giant who fell in love with a young woman from a nearby village. They married and lived together in a cabin on the Puig Campana.  One day, the giant met a stranger out on the mountainside who told him his wife was seriously ill and would die at sunset that day, as the last rays of the sun disappeared behind the peak.

The giant naturally rushed back to the cabin to discover his wife was indeed dying, just as the stranger had said. So the giant took his sword and cut the gap in the summit to delay the moment when the sun finally set, to give his love a few extra moments of life. History does not record what happened to the stranger, but I’m guessing it didn’t end well.

Sadly for the the mythmakers, these stories are scientifically impossible. The rocks of the Puig Campana are from a different era than the Islote de Benidorm (Late Jurassic v Early Cretaceous respectively, geologically speaking).  If you fancy a close-up look at the island, you can take a boat trip from Benidorm – see my post here.

You can climb the mountain from the pretty village of Finestrat (well worth a visit in its own right…see my post here) or hike around the base. Have I done it myself? Not yet, so take a look at the routes at the specialist walkers’ websites here and here.

You can drive some of the way up; follow the signposts for Font de Molí from Finestrat. The car park next to Font del Molí spring (see below) is a starting point for many of the walks on the mountain. 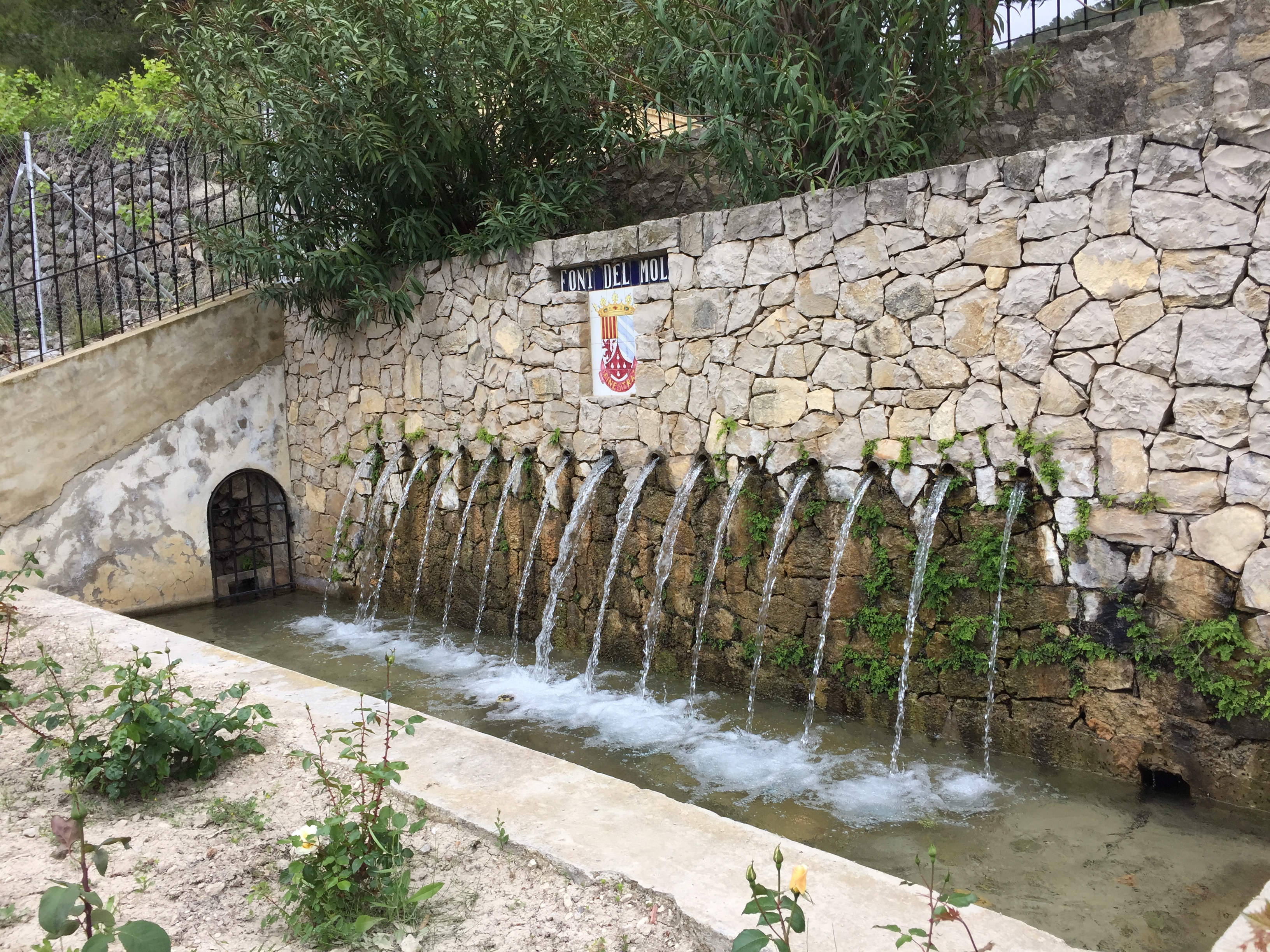 Font de Molí spring. A natural spring with water from the Puig Campana. People come to fill containers with the mountain water.

If you don’t have the energy or the inclination to tackle the mountain, there’s a barbecue area next to the car park. Just bring charcoal, food and a firelighter and eat at the stone picnic tables set among the pine trees. There’s also a handily-placed restaurant (there generally is in Spain!) Link here.

The Puig Campana attracts serious rock climbers as well as ramblers. More info here.  Believe it or not, some crazy people even run up the mountain for fun in the Puig Campana Vertical Kilometre race. Link here .

If you do decide to tackle Puig Campana, take plenty of water, especially in summer, and a mobile. It also gets cold up there in winter; the peak was snow-capped in January 2017 and 2018, and it’s often shrouded in cloud at that time of year. 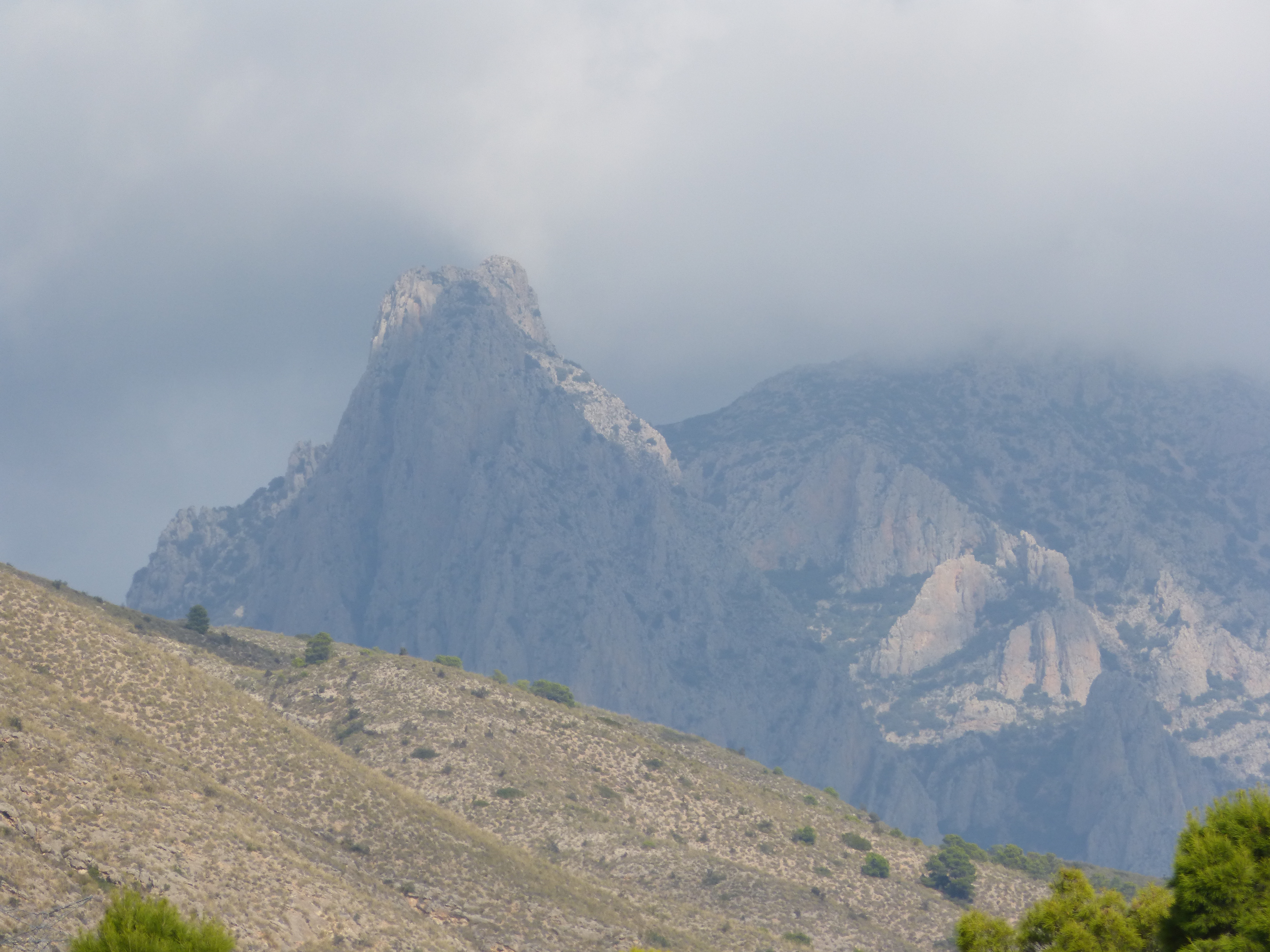 Puig Campana shrouded in cloud from the road to Orxeta 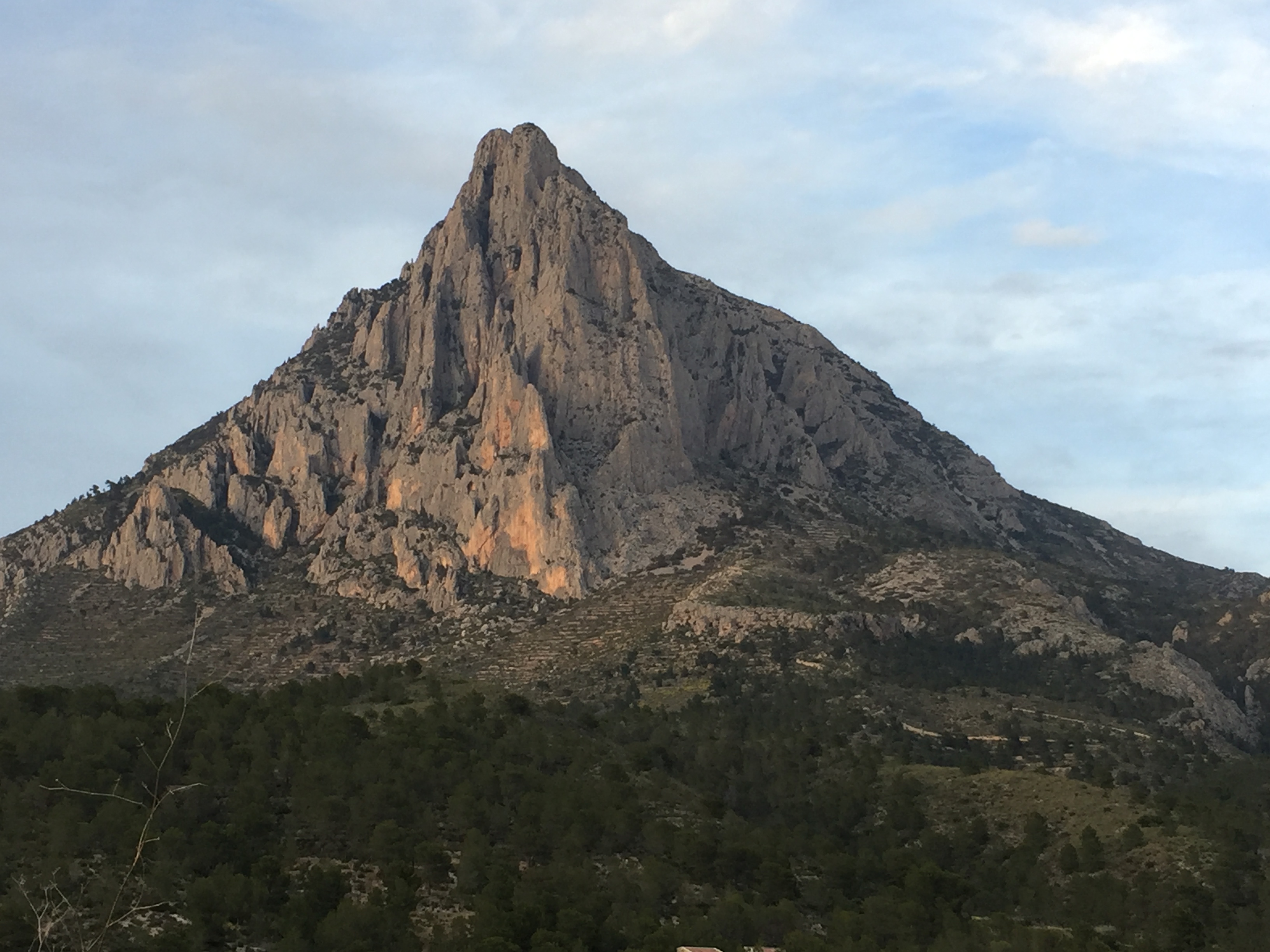 The south-western flank of Puig Campana; the characteristic gap in the summit can’t be seen from this side.

If you’re not the climbing type, you can still take in some spectacular views of the mountain by driving up the narrow road past Font de Molí car park. There’s only just room for two cars to pass each other and there are some interesting hairpin bends en route, but it’s a beautiful drive around the western and southern flanks of Puig Campana back to Finestrat (see map below)

By the way, Puig doesn’t sound anything like the way it’s written; it’s pronounced “pooge” or perhaps “puch” and is the Valenciano word for ‘hill’ or ‘peak’. So Puig Campana might translate as ‘Bell Peak’.

If you fancy trying other walks around the area, take a look at these blog posts: