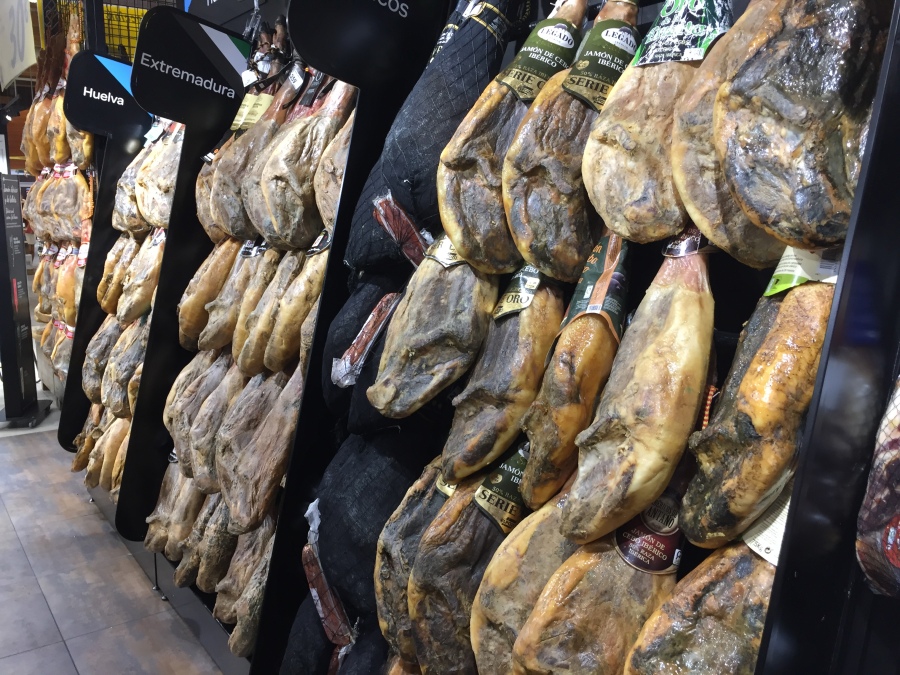 Spanish ham – jamón – is the best there is. Bar none. But how can you tell the best quality from the everyday, the madly expensive from the merely affordable? Read on…

The Spanish jamón tradition is a hangover from the time when much of the rural population lived in poverty and the killing of a pig was a seriously big deal. Nothing went to waste. Curing was the only way to keep the meat edible and the amazing jamón we eat today is the result.

Nowadays, the key difference is between jamón ibérico (top quality and pricey) and jamón serrano (reasonable cost, eaten every day). Both are air cured, never smoked. There are other, inferior cuts of ham available (like jamón de York), but my advice is….don’t bother.

The best (and priciest) Spanish ham comes from the native black Ibérico pig. This is not your average porker; the ibérico is an aristocrat among pigs. They’ve been roaming Spain for centuries and their meat is marbled with the taste-filled fat that makes it so prized.

Jamón ibérico is protected by a DOP (Protected Denomination of Origin), like a fine wine. It’s divided into categories, as follows:

The finest quality jamón comes from free range ibérico pigs fed on acorns (bellotas) from the cork and holm oak trees, which give the ham its distinctive flavour. And it really is distinctive; jamón de bellota has a taste like no other.

The pigs roam the dehesa in western Spain near the Portuguese border, a unique meadow landscape dotted with those oak trees, looking not unlike a traditional English parkland. In the autumn, the pigs gorge themselves during the montanera acorn harvest.

The dehesa stretches across a strictly defined area of Extremadura, plus parts of the neighbouring provinces.  Huelva province (centred on the town of Jabugo), Guijuelo in Salamanca province  and Los Pedroches in Córdoba have DOP designation for jamón ibérico. Cinco Jotas (aka 5J), probably the best known jamón de bellota brand, comes from Jabugo.

Black label or a black tag on the leg indicates a 100% pure bred ibérico pig, cured for at least 36 months. A full leg of jamón de bellota from one of these champions can easily set you back €400 plus. Serious prices for serious jamón!

Red label or a red tag: still jamón de bellota, but from an ibérico pig cross-bred with another variety. The label will state the percentage of ibérico – for example, ‘50% raza ibérica‘. Expect to pay €15-20 for 100g.

Jamón de recebo: you don’t hear this much these days. It used to mean an ibérico pig fed on acorns, but with its diet topped up with grain to reach slaughter weight, but the category is no longer officially in use.

Pata negra: literally “black foot”, the general term for jamón from the black-footed ibérico pigs. It’s not an official category though. When you see a leg of ibérico ham clamped in a jamonera for slicing, look at the trotter. It’s usually black if the jamón is genuine ibérico (though scams with black paint have been known).

Paleta: the front leg of the pig. Not as prized for flavour or as meaty as the rear leg. Cheaper too. 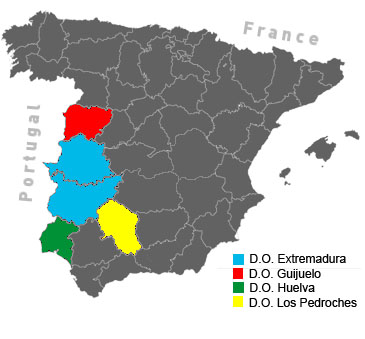 Jamón ibérico comes only from these areas, protected by a DO (Denominación de Origen), in west and south-west Spain

Experts will tell you that jamón from each of the D.O. areas has a different flavour all its own. Guijuelo jamón looks paler and it has a less intense, more delicate taste while jamón from Jabugo in Huelva province has an altogether stronger flavour.

Jamonera: slicing top quality jamón properly is a minor art form. The leg is held immovably in the jamonera clamp and a special long, thin-bladed knife is used so the slices are wafer thin. An expert can get the slices so thin, they almost melt in your mouth!

if you’re buying jamón ibérico in a delicatessen (charcutería), ask to try a thin slice first. It’s completely normal, even in this post-Covid era. Se puede cortar me una rodaja, por favor? Can you cut me a slice please?

The word serrano comes from sierra (mountain) as the hams were traditionally salted and then cured in the fresh air of the mountains. The meat can come from a range of different pig breeds. Much cheaper than ibérico and used every day in tapas and bocadillos (sandwiches). Cheaper varieties may be called jamón curado.

Jamón serrano can also be divided into categories:

Teruel in Aragón and the Trevélez area in the Alpujarra mountains near Granada are known for quality serrano ham. Some may have DOP (protected origin) or TSG (traditional speciality guaranteed) status with prices to match.

Want to know more about the great tastes of Spain? Try these posts: