If you do nothing else in Alicante, go to the castle! Perched high above the city on Monte Benacantil, the Castillo de Santa Barbara completely dominates the city, which I guess is why they went to the trouble of building it in the first place. The views from the top are unmissable….and the bonus is that there’s a lift that takes you nearly all the way up.

Head for El Postiguet beach, cross the multi-lane coastal highway on the footbridge, and you’ll see the tunnel entrance to the lift close by. Tickets are €2.70; buy them from a machine in the tunnel. Alternatively, you can drive or walk up the zig zag access road from Calle Vázquez de Mella that takes you in to the rear entrance to the castle.

Take the footbridge across the multi-lane highway from Postiguet beach 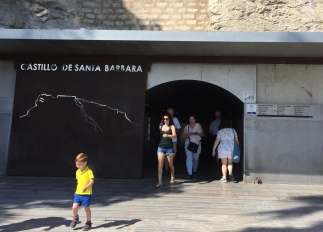 Entrance to the castle; take a ticket from the machine and walk about 100m to the lift

The oldest parts of the castle are right at the top and date from the 14th century. The castle was even held briefly by the English army during the War of the Spanish Succession in the early 1700s.

The golden sands of Postiguet beach stretch for almost a kilometre below the castle. As town beaches go, this one is pretty cool. The views are great both ways….either gaze out to sparkling blue sea or turn round and look up at the Castillo de Santa Barbara towering above you. There are play areas for kids, toilets, sunbeds and places to eat on the paseo behind the beach.

El Postiguet gets pretty packed in high summer, so your best bet is to head for the far end, away from the port, where the crowds thin out. There’s limited parking just behind the beach, or head for the bigger underground Parking Puerto on Plaza Puerta del Mar.

The Explanada de España (esplanade) stretches for half a kilometre along the seafront opposite the harbour, a palm-shaded promenade where Alicantinos and tourists alike come for a relaxing evening stroll. Its striking wave-like mosaic patterns are one of the symbols of the city; as are the elegant white-fronted 19th century buildings at the end nearest the castle. If the architecture was this good all the way along, the Explanada would be a marvel, but sadly the modern towers don’t quite measure up.

Arm yourself with an ice cream at Kiosco Peret at the start of the Explanada, and stroll past the bars and restaurants, the buskers and cartoon artists. You’ll often find stalls selling arts and crafts or occasionally a concert at La Concha, an oyster-shell auditorium halfway along.

Take a small detour to check out the Plaza de Correos just a few metres away on the Calle San Francisco. The square is officially Plaza Gabriel Miró, but Alicantinos unofficially named it after the elegant Correos (post office) building which dominates one side. A cool place to have a drink and a tapa on a summer’s evening in the shade of the giant ficus trees.

Cross the main road from the Explanada and walk back along the marina front. There’s an awful lot of money floating out there on the gin palaces that never seem to go anywhere.

We lesser mortals can take a more affordable boat from here out to Tabarca, an island nature reserve about an hour away off Santa Pola.

Head back along the waterfront to the Plaza Puerta del Mar and turn right towards the casino; there are a range of modern bars, restaurants and clubs here which come to life at night.

Look for the memorial to the British steamship Stanbrook and her heroic captain and crew; in 1939, they rescued more than 2,000 Republican refugees from Alicante in the last dreadful days of the Spanish Civil War. For more on the remarkable story of the Stanbrook, see my blog here.

Alicante’s population has exploded in the last twenty years, but it still has a picturesque old town in the narrow streets clustered beneath the castle. It used to be run-down and rather sleazy, but the Barrio Viejo (old quarter) has had a major facelift in recent years and is now a focus for Alicante’s night life. Bars by the score line the car-free streets and are buzzing with people until dawn in the summer.

It’s a cool place to be in the daytime too. Stroll along the Calle Mayor and eat at dusk in one of the restaurants in the beautiful Plaza de la Santísima Faz. The City Hall (Ajuntament) and the Cathedral are both worth a look.

I think Spanish food markets are wonderful places, full of the most amazing produce, and Alicante’s is no exception. Housed in an elegant 1920s building on Avda Alfonso Sabio, the Mercado Central has an eye-popping selection of fresh meat and embutidos (delicatessen) on the first floor and stalls piled high with fruit, veg and fish downstairs.

Once you’ve stocked up – or just wandered through goggle-eyed – head to the cafes on the square at the back of the market for a late breakfast. On Fridays and Saturdays, the square fills up with young people enjoying the afternoon tardeo – a chance to drink beer, snack on food bought in the market, meet friends and generally have a good time.

Try also Katana, a relatively new place serving sushi and Asian fusion street food downstairs at the back of the vegetable section. Eat at the bar and watch the food being prepared in front of you. Booking advisable.

For more on Alicante and Villajoyosa markets, see my blog here.

Alicante is the big shopping centre of the region, so if retail therapy is your thing, head for Avenida de Maisonnave, one of the main avenues through the centre of Alicante. There’s a huge range of shops from the big department store El Corte Inglés to small independents, from international brand names to coffee and tapas bars to relax in.

Most stores are open until 8pm Monday-Saturday (they’re closed on Sundays), though some of the bigger ones stay open until 9.30pm

Try visiting MARQ and MACA. They might sound a bit like Mork and Mindy (a 1970s TV show if you’re too young to remember) but these two are well worth a look.

MARQ is the archaeology museum, housed in a former hospital on Placa Dr Gómez Ulla, at the rear of the castle. This is no dry and dusty archive; It was European Museum of the Year in 2004 and it’s still pretty cool, with video walls showing how life might have looked for Alicantinos thousands of years ago.

The Romans had a big impact in this part of the world, so there are plenty of finds on view, all well-lit and explained in Spanish and English. For more on the MARQ, see my blog here. There are quite a few finds on show from our town, Villajoyosa, a few kilometres up the coast north of Alicante.

MACA is the Museum of Contemporary Art, an stylishly converted former granary in the heart of the old town on Placa de Santa Maria.  Look for works by Miró, among others, plus a section devoted to Eusebio Sempere, Alicante’s best known artist. Entry is free.

The big, big fiesta in Alicante (aka fogueres in Valenciano, the local dialect). Hogueras translates as bonfires in English, and they run over several days at the end of June around the fiesta de San Juan, with serious fireworks and colourful processions with giant figures (cabezudos) through the city centre.

This tram trip delivers two things; firstly, a scenic ride along the coast with the kind of views you’ll never get from the road, and secondly, you get to visit our favourite town, Villajoyosa, about 50 minutes up the line. And it costs less than €5 each way.

Head for the underground tram stop in the middle of Plaza de Luceros and take tram L1 towards Benidorm. Sit on the right for the best views. Info here. 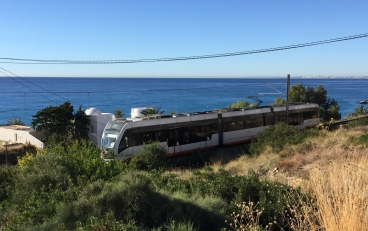 Trundling happily along the coast with some beautiful views; the tram from Alicante nears Villajoyosa

Take line L1 out of Alicante along the coast to Benidorm. The main stop in Villajoyosa is Creuta, right in the middle of the town.

The tram never goes much above an amiable trundle, so there’s plenty of time for gazing out of the window. Heading out of Alicante city, it passes the small beach of Albufereta before running along the huge Playa de San Juan, a 3-kilometre long golden strand backed by a solid phalanx of holiday apartments. It then goes through Campello – a nice golden beach too – and trundles on via twists, turns and a tunnel or two to Villajoyosa. Get off at Creueta stop in the middle of La Vila and walk down through the old town to the beach.

In theory, the tram goes all the way up the coast to Denia. Easier said than done; you need to change in Benidorm, which will take you as far as Calpe (aka Calp). Stop off en route at the picturesque hilltop village of Altea, while Calpe itself boasts the Peñon d’Ifach, an imposing Rock of Gibraltar lookalike. Then, sadly, it’s a bus to Denia because of engineering works that don’t seem to have any end date.