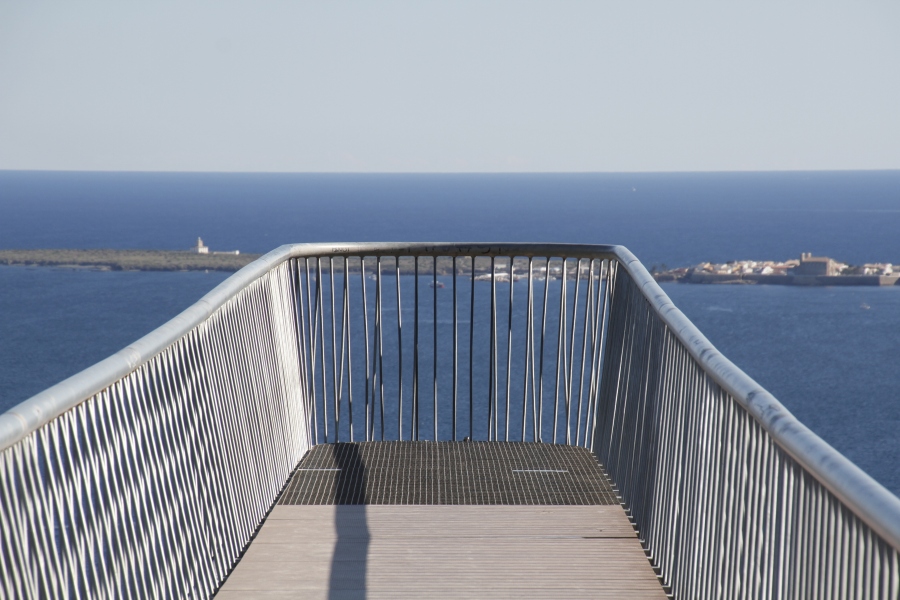 If you go for a night-time stroll on a beach anywhere near Alicante and look out to sea, the chances are you’ll notice a powerful flashing light on the horizon. That’s the Faro (lighthouse) de Santa Pola, perched on the cliffs between Alicante and the fishing port of Santa Pola itself.

It’s well worth a visit. The views are spectacular, to put it mildly. The lighthouse sits above sheer cliffs 450 feet (138m) high. It’s a very, very long way down.

And to make it even more vertigo-inducing, there’s now a 100 metre long skywalk that takes you out over the cliff edge. You get stunning views over to the island of Tabarca, while off to your left the sparkling blue bay of Alicante opens up. On a clear day, you can apparently see as far as the Peñon de Ifach rock at Calpe, 70km up the coast (sadly, we couldn’t).

If you’re lucky, you’ll also get a free air show thrown in. The lighthouse is a favourite spot for paragliders, effortlessly riding the thermals back and forth along the cliff top. It’s quite a sight; there are often half a dozen paragliders in the air near the walkway at any one time.

The experts swoop silently by under their canopies, pirouetting elegantly in the sky at the end of each pass, but you do also hear the occasional squeal of excitement from a novice experiencing a first flight in a tandem harness. Link here if you’re brave enough to give it a go yourself!

The lighthouse, built in 1858, isn’t open to visitors, but there’s plenty of information about its history, the geology of the peninsula (it was a coral atoll millions of years ago) and nearby walks on signboards nearby.

A short walk from the car park, you’ll find relics of the Spanish Civil War: the anti-aircraft defences built on the Cabo de Santa Pola to protect Alicante. The city was bombed many times – mostly by Mussolini’s Italian air force, based in Mallorca and flying for Franco’s Nationalists. In the worst attack, in May 1938, around 300 people died in a raid at the city’s Mercado Central.  For more on how Alicante survived years of bombing raids, try my post here.

How to get there: see the map below.

The best way is by car, though there are local bike trails and footpaths. Take the main N-332 road from Alicante towards Santa Pola and the turning to the Faro de Santa Pola is about 6km beyond El Altet. However, you can’t turn left across the traffic, so head towards Santa Pola and turn round where you can.  The road to the lighthouse is signposted, but only if you’re coming from the direction of Santa Pola; it’s almost opposite an electricity sub-station. There’s then a single-track road running 3.5km to the lighthouse itself.  You can park nearby and it’s then a short stroll on a rocky path to the skywalk.

For the return journey, and a great view of the cliffs from below, try driving into Santa Pola and then follow the coast road through Santa Pola del Este.  That takes you back along the base of the cliffs back towards Urbanova and Alicante.