Santander and Bilbao on Spain’s north coast are both linked by ferry to the UK, and for thousands of Brits, they’re a handy way of avoiding the long drive through France en route to the Costas. But they’re well worth visiting in their own right, though both are chalk-and-cheese different.

On the one hand, Santander is an elegant resort with one of the most beautiful town beaches in Spain, set on a wide estuary in Cantabria.

On the other, Bilbao is proudly Basque and the biggest city in Northern Spain, once a gritty steel-and-shipyards town, which reversed its slow decline with one of the world’s most remarkable buildings: the Guggenheim museum.

We came up the estuary by ferry into Santander in the early evening, a time that perhaps shows the city at its best. As the ship nudges closer to the quay, it’s easy to pick out the monolithic bulk of the Banco Santander headquarters. Let’s face it, most Brits know Santander because of the bank; there’s a branch on most high streets in the UK.

Then there’s the latest addition to the waterfront, the Centro Botín, an art gallery created by celebrity architect Renzo Piano (he of the Shard in London, Europe’s tallest building), yet another piece of landmark architecture which opened in 2017.

Santander clearly hopes the Botín will ‘do a Guggenheim’ in the same way as Frank Gehry’s masterpiece transformed the fortunes of Bilbao, just an hour and a half down the road.

And while it might lack the wow factor of the Guggenheim, the Botín is still a pretty cool gallery – Piano’s two smoothly-rounded pods reach out over the water and the huge windows give you spectacular views of the estuary to match the art inside. Take in an exhibition or just ride the lift to the roof for a free view. There’s a small permanent collection of paintings on show, owned by the Botín family.

From the Centro Botín, take the scenic stroll along the Avenida de la Reina Victoria to the Playa del Sardinero, surely one of the most beautiful urban beaches in Europe.

The gently shelving sands are backed by elegant late 19th century buildings from Santander’s golden age, clustered around the Casino on Plaza Italia. Head for the Jardines de Piquío on the headland that splits the beach in two for a great view in both directions.

At the turn of the twentieth century, Santander was a seriously upmarket place to take a holiday. So much so that the Spanish royal family had a home here – the Palacio de la Magdalena.

As palaces go, La Magdalena is…well…not very palatial. It looks a bit like a large English country house designed by several architects all working at once, but without ever talking to one another. There’s also a tower stuck randomly in the middle for good measure, perhaps to prove that it really is a proper palace.

The Magdalena was built specifically for the royal family in 1911 and remarkably, the money to pay for it was raised by public subscription. But only 20 years later, King Alfonso Xlll was forced into exile, never to return. As a rapid fall from grace, that takes some beating, even by the standards of European royalty.

Alfonso didn’t have an easy life, at least to start with. His father died during his mother’s pregnancy, so he emerged from the womb as a King…always a bit of a burden. And it’s easy to sympathise with someone whose first public appearance was being served up as a naked new-born on a silver tray for an inspection by the Prime Minister, just to make sure he was the genuine article.

As an adult King, Alfonso messed up rather spectacularly, firstly by backing military ventures in North Africa that led to the catastrophic defeat at Annual, and then by supporting the Spanish dictator Primo de Rivera rather too enthusiastically. By 1931, his countrymen had pretty much decided they could live without him, and he went into a bitter exile in Rome. His summer palace became a university and is now owned by Santander city.

The best thing about the Magadalena is its position, jutting magnificently out into Santander Bay, with beautiful views across the estuary. On the eastern side of the headland is the Playa de Bikini, named after those who first dared to flout the strict conformity of 1950s Franco’s Spain and wear one.

On the other side, rather incongruously, are three galleons pointing seawards, ships used by the 20th century explorer Vital Asar to cross the Atlantic. Alongside them is the raft he used to cross the Pacific, rather like the Kon-Tiki of Norwegian explorer Thor Heyerdahl.

Just 100km to the west lies Bilbao, like Santander also connected by ferry to the UK. But the similarities pretty much end there. Bilbao is in Euskadi…the Basque Country…and is a big, bustling city shoehorned into the narrow Nervión river valley.

Bilbao’s jewel is of course, the Guggenheim. But it’s easy to forget just how tough things were for the city in the years before the museum erupted from its decaying riverbank site.

The seemingly endless and very dirty war between the Basque separatists of ETA and the Spanish state had blighted the whole region. Add to that a sky-high unemployment rate of 25%, thanks to the decline of steel and shipbuilding. And if that wasn’t enough, the city suffered catastrophic flooding in 1983 that left water 10 feet deep in the old town. 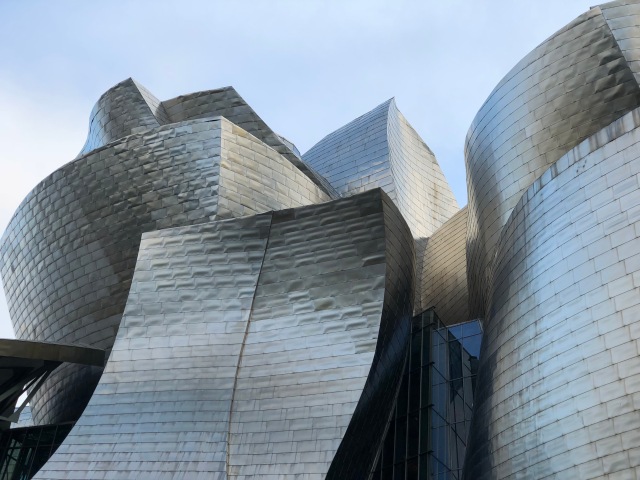 But on the other side of the world, the Sydney Opera House offered an inspiration…an architectural project so ambitious that it would really put the city on the map.

Personally, I’d have loved to have been in the room when Frank Gehry first walked in with his vision of a shining, sinous, other-worldly museum, looking quite unlike anything else, anywhere, ever. What did people around the table say? Wow!? Or WTF???

Clearly the “wows” won out, and upwards of £100m later, his dream became reality. That was despite the best efforts of ETA terrorists,  who tried – unsuccessfully – bomb the place. They hid explosives inside Jeff Koons’ “Puppy”, a distinctly wacky 43 foot high Highland Terrier that still sits perkily outside the Guggenheim entrance.

20 million or so visitors have since poured in to Bilbao. Cities all over the world are still trying to pull off the same trick, from Abu Dhabi with its version of the Louvre, to Santander just up the road with the Centro Botín, both opened in 2017.

There is of course, much more to Bilbao than the Guggenheim…and for all its tourist pulling power, the city’s regeneration isn’t just down to art. It seems a more confident place, looking better and brighter than when we were last here nearly 15 years ago.

Stroll along the River Nervión to the Mercado de la Ribera, a good place to try pinchos (pintxos in Euskera), the typical small Basque tapa pierced with a cocktail stick. There’s a bewildering variety on offer here, washed down perhaps with a glass of local Txakoli dry white wine.

Try also the local artesan Idiazábal cheese, made from the unpasteurised milk of sheep grazing the high pastures in the Basque Country and Navarra. For more information, click here

Cross the road from the market and wander up into the narrow, atmospheric streets of the old town to the cathedral…in its cloisters is a mark on the wall, alarmingly high up, showing just how bad those 1983 floods really were.

The new football stadium, the home of Atletico Bilbao is also worth a look, even if you don’t follow football yourself…it’s distinctive, to say the least. And that’s in a city that isn’t exactly short of good looking modern buildings. Even the metro has a celebrity architect: Norman Foster. The glass station entrances are nicknamed ‘fosteritos’ after him.

Just as distinctive as the football stadium is Atletico’s recruitment policy. They’re famous for only selecting local talent – players from the Basque Country, Navarra, and over the border in the French Basque territory. They’re clearly doing something right – Atletico are one of only three clubs never to be relegated from La Liga since it first began.

That’s kind of refreshing when you think of the € squillions splashed on galáctico players by the likes of Real Madrid and Barcelona. But it all fits with the idea that the Basque Country really is that – a different country – albeit one whose future appears to be within Spain.

Like to know more about northern Spain? Read my post on driving through the Aragón Pyrenees here