Museum visits are generally for rainy days. Problem is, there aren’t that many rainy days on the Costa Blanca. So visiting the archaeology museum in Alicante (the MARQ) probably means sacrificing some sunshine. But it is worth it.

The MARQ is housed in Alicante’s former hospital. It won European Museum of the Year in 2004 and it’s still really good. If your idea of an archaeology museum is dusty pieces  of obscure pottery with labels in spidery handwriting, then think again.

The MARQ is as technically advanced and interactive as any. And it has loads of stuff from my town Villajoyosa, 30 minutes drive up the coast.. Probably more even than Villajoyosa’s own museum.

One of the big finds was the Roman villa of Xauxelles, near La Ermita on the outskirts of Villajoyosa. Most of it was excavated by a priest and amateur archaeologist, back in the 1940s, and it hasn’t been touched since, because (frustratingly) it lies on private property.

But even that cursory excavation turned up some fascinating finds, which you can see in the MARQ. There are fragments of mosaic floors and beautiful carvings in stucco housed in subtly lit displays. Villa Xauxelles must have been quite a place back in the third century AD.

Behind the display cases are video panels running the length of the galleries, showing you what life might have been like for people living along the Costa Blanca in ancient times.

There’s even a large scale replica of a Roman ship in the central gallery, with walkways that allow you to move around the vessel, peer down into the hold and see the cargo of amphorae (storage jars).

A vessel very like this one sank off Villajoyosa port in the 1st century AD. Named the Bou Ferrer after the divers who discovered it, the ship is the most important find of its kind in the entire Mediterranean. More info about the Bou Ferrer here. See my blog on the ancient history of Villajoyosa/La Vila Joiosa here.

Explanations are generally in Spanish, Valenciano and English. There are plenty of other finds on show from all over Alicante province. The little guy below is my favourite – he’s a votive offering to the gods and was found at Malladeta on the outskirts of Villajoyosa. 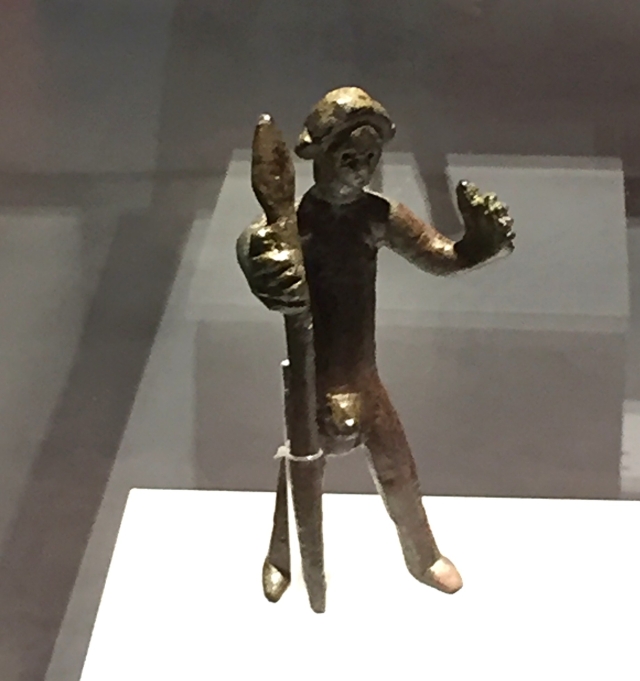 Bronze figurine from the 2nd century BC, found at Malladeta. This little guy was a votive offering to the gods, asking for health, protection or prosperity. He used to be on loan to Villajoyosa’s own museum – sadly, you now have to go Alicante to see him.

The MARQ is on Plaza Dr. Gómez Ulla, round the back of Alicante’s castle – go by tram and get off at the stop MARQ-Castillo. Entry is only €3; probably the best three euros you’ll spend in Alicante (€1.50 on Sundays).

TIP – if you’re going by car, park for free in the Plaza Mar shopping centre on the other side of the Avenida de Denia and take the five minute walk across the footbridge to Carrer Germans Lopez de Osaba.