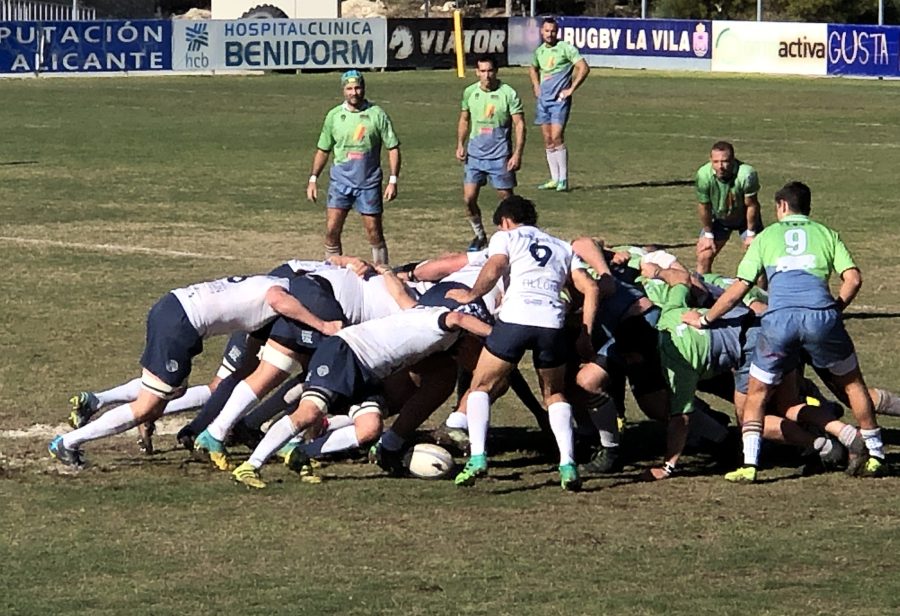 The Spanish play rugby! Who knew? In this football-obsessed country, rugby union is so far down the sport pecking order, you’d be forgiven for failing to notice it at all. But here in Villajoyosa, just up the coast from Alicante, rugby is alive and kicking.

CR La Vila is actually one of the better teams in Spain – quite something for a little town like ours. A home game at their stadium is a great way of spending a Sunday afternoon, in normal times at least.

Despite Covid-19, La Vila are still playing matches – sometimes with a socially distanced crowd, sometimes behind closed doors, depending on the state of the pandemic. And they’re doing pretty well. So far they’re unbeaten and top of their division. Their last home game was a thumping 85-0 win against BUC Barcelona.

Scrum down against Babarians Calviá from Mallorca. The first home game of the Covid-affected 2020/1 season and a 31-7 win.

It costs just €5 to see a match at the Estadio del Pantano, a few minutes drive out of town on the road inland to Orxeta. Kids under 12 get in free. The stadium and the next-door sports centre are great – I’m guessing more than a few clubs back in the UK would love the facilities they have here.

Some come here for warm-weather training; Super League side Leeds Rhinos were here in January 2020. World Rugby were due to hold the under-20 world championships in La Vila in September 2020 until Covid-19 got in the way.

The crowd is usually a friendly mix of local fans and expat or tourist Brits getting their rugby fix. Buy yourself a beer or something off the barbecue and enjoy the match.

For British rugby watchers, a game in the sunshine of La Vila certainly beats the biting wind and driving rain back home. And the quality of the rugby is not bad either.

The first team is a mixture of home grown players with a sprinkling of overseas talent, mostly from South America. They play in the second division of Spanish rugby – División de Honor B – although as recently as 2019, they were in the top flight. That’s pretty good going for a team this far south in Spain, a long way from the rugby heartlands up near the French border.

Clearly rugby is never going to take the place of football – or even basketball – in the heart of your average Spanish sports fan. The Spanish movie star Javier Bardem, who played rugby himself in his younger days, was once quoted as saying; “being a rugby player in Spain is like being a bullfighter in Japan”. He had a point.

But the game has a firm footing in Spain. The 2018 European Champions Cup final was held in Bilbao. And Spain’s sevens team even managed to beat the mighty All Blacks in a World Rugby Sevens Series match in March 2019; La Vila’s Javi Carrion was in the squad that day. Highlights here are worth a watch – the Spanish players look as if they can’t quite believe it!

Los Leones – the Spanish men’s national side – are ranked 16 in the world and play in the second tier of European rugby, one below the Six Nations, against the likes of Belgium, Russia, Romania. It’s a league dominated by Georgia who are clearly a cut above the rest, but Spain usually manages second or third place.

The Spanish women’s team – Las Leonas – have fared rather better. They won the Rugby Europe championship, one step below the Six Nations, in March 2019 and are ranked ninth in the world, ahead of top-flight rugby nations like South Africa, Ireland and Scotland. Las Leonas were here in Villajoyosa in autumn 2020 for a match against an Iberdrola XV.

If you’re ever in a Spanish rugby conversation, here are a few words to help you through. One or two might be Argentinian equivalents. If I’ve got any wrong, feel free to leave a note in comments!

2 thoughts on “Sunshine rugby on the Costa Blanca”