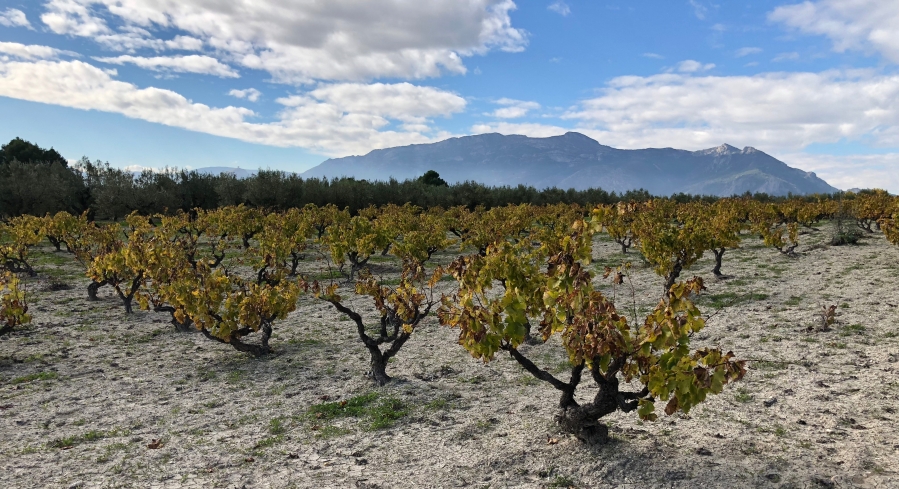 Up in the mountains, around the town of Alcoy, lies the smallest and least-known part of the Alicante wine region: El Comtat.

It’s a world away from the bigger producers of the Vinalopó next door, with their rank upon rank of Monastrell vines stretching in every direction. Instead, this is wine making on a defiantly small scale.

Here’s how it works. You have an old, neglected patch of land…a hectare, perhaps less. Maybe it grew grapes in the past, maybe it still has vines on it, maybe something completely different. But you fancy making wine once again. But how? Who gets you started, who cultivates the vines, who makes the wine?

This is where Celler Muntanya comes in. The bodega started back in the early 2000s, the brainchild of Juan Cascant. He’d spent most of his working life up till that point in an architect’s office, dabbling in a little winemaking on the side.

The business really got under way in 2004 and by 2006, Celler Muntanya was producing wine that hit 90 points on the Peñin scale; amazingly good going for such a tiny operation. The Guia Peñin is the Spanish wine bible; anything from 90-94 points is classified as ‘excellent’.

Now Juan has 28 microviñas or minifundios (smallholdings) under his care, mostly in the countryside around the bodega. The owners come from all walks of life – IT people, a butcher, a doctor. All they have in common is a little land and a love of wine. Celler Muntanya looks after the microviñas in collaboration with the owners, organises the harvest and creates the wine.

Next to the bodega, on a riverside plot alongside the little Rio Agres, lies Juan’s campo de experimentaciòn, where varieties I’d never heard of are on trial. Verdil for example, a grape that fell out of fashion and is apparently down to its last 50 hectares. There’s also the exotically named Farannà.

Across the 28 microviñas, there are even more varieties. A bodega tour in Juan’s 4×4 takes you down narrow lanes, through a sleepy village and along farm tracks to reveal small plots of Syrah, Malvasia, Tannat, Garnacha Tintorera, and Merseguera among the olive groves…sometimes more than one variety on the same plot. There are also one or two more relative unknowns, like Bonicaire (also known as Trepat).

One microviña has 100 year old Malvasia vines; the resulting wine hit 95 points on the Peñin scale. A seriously good result (anything over 95 is ‘exceptional’).

All are vinified separately back at Celler Muntanya’s compact bodega, just off the CV-705 outside Muro de Alcoy. Most are available for anybody to buy, which results in a range of wines much bigger bodegas would struggle to match. The microviña owners can also opt to keep their own produce and drink it themselves. 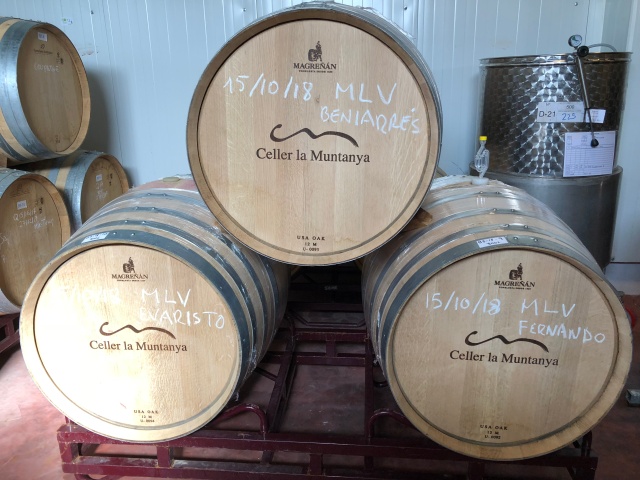 One blend of Monastrell, Garnacha Tintorero and Giró has been christened Iron Bridge, a tribute to the magnificently-titled Alcoy and Gandia Railway and Harbour Company. This was the British-Spanish consortium that built the railway up from the coast at Gandia to Alcoy in 1892, transforming the economy of the region in the process. Sadly, the railway disappeared in the 1960s, but the wine is still good!

There’s also a really nice Saüc vermouth, flavoured with botanicals gathered mostly from the nearby slopes of Monte Mariola, which dominates the Alcoy landscape.

Celler Muntanya runs bodega tours, so you can see the microviña project for yourself. The full tour is more expensive than most, but there are also cheaper basic visits with tastings. Details here.

Incidentally, I borrowed the phrase ‘small is beautiful’ for the title of this blog post. The guy who invented the expression was an economist named E.F.Schumacher, who used it for his book “Small is Beautiful: A Study of Economics As If People Mattered”. And I can’t help feeling old E.F. would have been impressed by the Celler la Muntanya philosophy of small plots and green agriculture.

Schumacher was writing about sustainability back in the 1970s, at a time when not many people had even heard of the word. He liked a spot of gardening himself and was president of the Soil Association, the UK-based campaign for healthy food and farming. So kind of appropriate, really.

A tour around a selection of Alicante’s vineyards

The wine that nearly died: on the trail of Alicante fondillón